So what am I working on now?

I'm moving into the final stages of a new book for Penguin Australia. This story is not linked to the previous three which all featured different members of the Fairburn family. It's similar to Moonlight Plains, though, in that it is another contemporary and historical story combined, but I don't want to jinx myself by giving away too many details until it's entirely finished. I can tell you, though, that it will be called The Secret Years... and this is a collage of some of the images that have inspired me. What do you think? 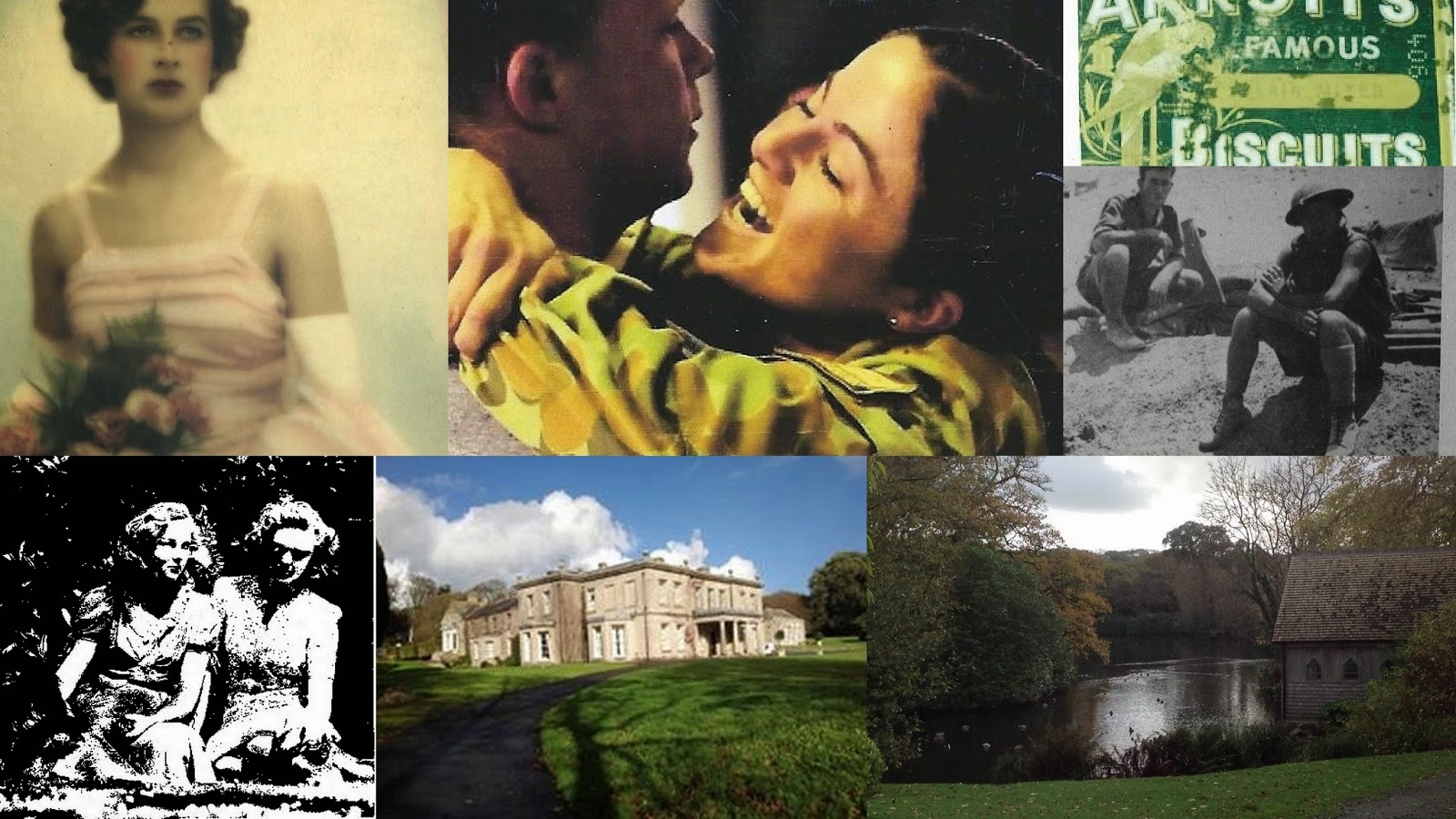 Posted by Barbara Hannay at 1:37 PM 2 comments: Links to this post

Yesterday I captured this shot of a storm rolling in. 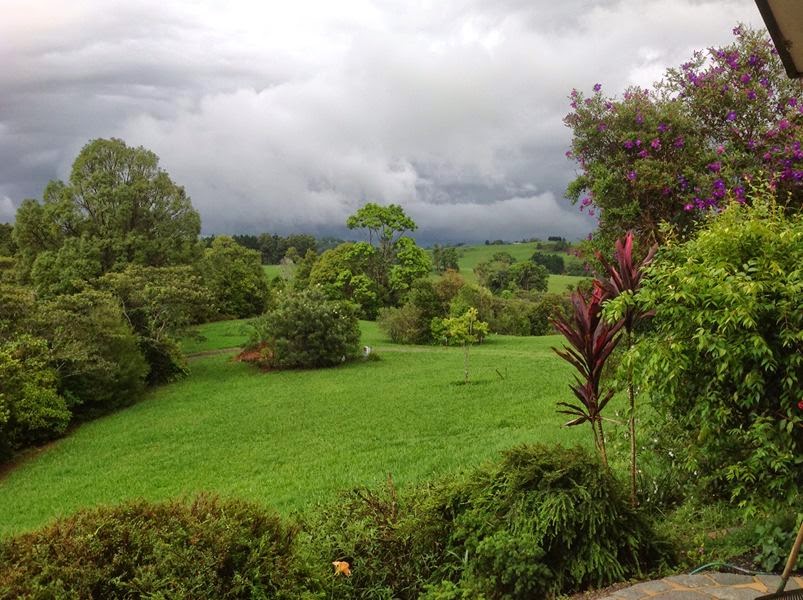 And then ... we had a blackout, so it was the perfect excuse for candles. 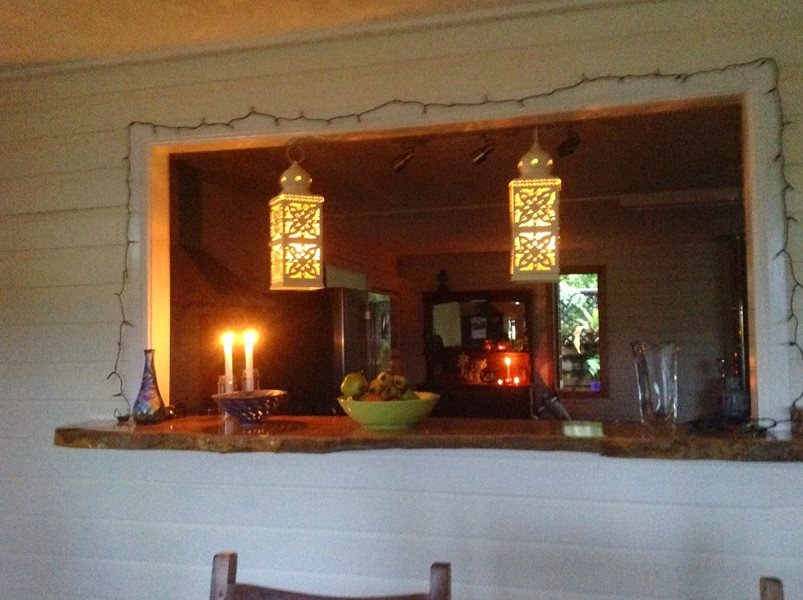 Posted by Barbara Hannay at 1:41 PM No comments: Links to this post 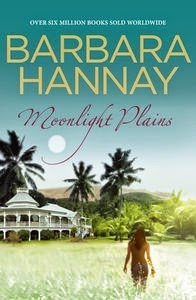 Do you enjoy checking out deleted scenes when you watch DVDs? As a writer, I find it interesting to see the editing decisions that directors have made.

In the writing world there are a lot of discussion about the pros and cons of writing prologues and epilogues. Those of you who've read my M&B books will know that I love them, and I've certainly had positive comments from readers, especially regarding epilogues.

Prologues are sometimes regarded as unnecessary, as the information in them can be seeded into the main story through a character's thoughts, dialogue or flashbacks.

Even so, I often write prologues. They're fun and sometimes they can have a different feel from the rest of the books, which is also fun for a writer.

With Moonlight Plains, however, during the editing stage, I decided to delete the prologue I'd written.

But because it was fun to write, and because some of you may be interested, I've decided to share it here... I'd love to hear your thoughts.

So My DELETED SCENE...

It’s
Friday night in a beachside suburb in
tropical Townsville, at the end of a perfect autumn day. The little
white-walled flat is rocking.
Music pumps from an ipod dock. Tiny
paper lanterns float like rainbow fireflies along the curtain rods.
Voices call greetings, bubbling with laughter and gossip. Everyone’s
here – Sally’s girlfriends and their current guys, a selection of
Josh’s workmates and their partners, all of Josh’s football
mates, including the three he’s known since he first played for
Central’s Under 12.

Luckily, the combination of Josh and Sally’s
friends seems to be working. They’re starting to mix as they gather
in groups; in the lounge room where vintage
pieces live harmoniously beside a bright red contemporary sofa, in
the kitchen where Sally’s collection of potted herbs have been
shifted to make room for bottles of wine, or spilling into the
backyard where Josh’s best mate, Toby, is waiting for the barbecue
plate to heat before he starts flipping prawns.
The guests are relatively quiet and there’s an air of expectation,
of hanging out for the main event.

‘So
when’s the party boy arriving?’ Megan, Sally’s best friend, had
been involved in planning this night from the start.
Sally glanced at the fish-shaped
clock on the kitchen wall. Josh was driving back from a job in Ingham
where one of his firm’s wealthiest clients was gravely ill. The man
wanted to settle his legal affairs and Sally knew that Josh was
quietly chuffed to be hand-picked for the task.

Almost an hour ago, he’d rung to tell her he was leaving.
‘I’d say he’ll be here in about ten
minutes.’ Sally felt a riff of excitement, imagining the surprise,
the fun of everyone leaping from their hiding places and cheering.
It
was the first time she’d hosted a surprise party. Ever since she
and Josh had become an item, she’d been putting a big effort into
his birthdays, but she usually tried to
find a special present rather than throwing a party. The first year
she’d hired a bright yellow sports car and they’d had a fabulous
time, zipping up Castle Hill, and out to Harvey’s Range. Other
years there’d been a hot air balloon flight, a weekend on Daydream
Island, a beach picnic with a gourmet hamper and candles.
‘You
know you spoil Josh,’ Megan had commented recently. ‘I hope he
pays you back.’
Of
course, Sally had been quick to defend him. ‘It’s not a
competition. Everyone has different ways of expressing their love.’
She’d
read an article about the different languages
of love and she’d found the theory
reassuring. It made sense that people expressed their feelings
differently, some through gifts, others with encouraging words, or
helpful acts, or with physical touch…
Josh was a guy who had a cheering way with words
and, as Sally had always been a bit shy, that suited her perfectly.
On their first date when they were still in
high school, he’d taken her to the movies to see Iron
Man and
afterwards he’d driven her home in
his father’s car with red P plates stuck on the windscreen and
they’d stopped at The Strand. Sitting in a parking spot, looking
out across the bay to Magnetic Island, she’d been a bit nervous,
knowing that Josh was going to kiss her. But first he’d told her a
story about a small but embarrassing explosion he’d caused the day
before in chemistry prac. He was so self-deprecating and funny he’d
made her laugh and she’d loved him for it. Even now, she adored it
when Josh told stories or jokes at parties, holding everyone’s
attention and rendering them helpless with laughter.
Although
they’d been the first, practically the only
couple in their crowd, to marry, Sally
didn’t mind that they were an anomaly, spoiling the statistics,
bucking the trend of their generation.
‘My
dad reckons we’re throwbacks from the fifties,’ she usually joked
if the subject was raised, although secretly, she sometimes worried
that Josh would wake up one morning and be hit by the realisation
that he’d missed an entire decade of freedom and fun. So many girls
he could have had…
On the other hand, it didn’t bother Sally that
she’d only had one boyfriend. Why should she keep looking when
she’d already found her One and Only?
It would be like shopping and finding a dress that
was absolutely perfect in every way, then trying on dozens of others
just to make sure, and discovering they
weren’t right. Just imagine rushing back to the first shop, only to
be told that your perfect
dress had been sold.
Sally had seen customers at her dad’s antique shop almost weep with
disappointment because they’d hesitated at an auction.
How unbearable it would have been, if she’d played the field and
missed out on Josh and been condemned to spend the rest of her life
in the same town, watching him living with someone else.
‘Hey, Sally.’ Megan tugged to her sleeve.
‘Time’s almost up.’
‘Right.’ A shiver of excitement ran through
her and she took a deep breath.
Nervous now, she ran her hands down her sides. The lacy fabric of the
simple shift that she’d bought especially for tonight felt crisply
reassuring. She knew Josh would love it. ‘OK, guys!’

Hardly anyone paid attention to her call, so she turned the music
off.

‘Josh should be here any minute,’ she
announced as heads swung her way. ‘Time to quieten down.’
This was greeted by giggles and grins as people
looked around.

‘I think we should hide. We want this to be a
surprise, so you can either get behind the sofa, or crouch down in
the kitchen behind the counter, or go out the back,’ Sally told
them. ‘But hurry. Toby, can you hover near the back door and let
the people waiting outside know when to come back in?’
Everyone scattered, jostling and laughing, and Sally felt a spurt of
panic. Had she left it too late to herd this crowd away? Quickly, she
turned off the coloured lanterns that she’d strung everywhere. The
lamp in the corner would give just enough light.

When Josh entered the darkened flat and saw the bowls of nuts and
chips scattered about, he’d guess something was on the go, but he
probably wouldn’t notice them the very minute he walked in and by
then everyone would be yelling, ‘Surprise!’
Sally was almost jumping with excitement as she crouched in the
kitchen. The flat was silent now apart from the occasional whisper
and giggle. She’d tried to time this perfectly and she hoped they
wouldn’t have to wait too long.
Her thighs were beginning to ache from her cramped pose when Megan
hissed in a loud stage whisper, ‘I think I heard a car pull up.’
The sudden tension in the flat was palpable.
Outside, a car door slammed and Sally could sense everyone holding
their breath.
Footsteps sounded on the concrete path. Sally’s
heart thumped as she waited for Josh to push open the fly-screen
door.
No doubt he would call his habitual, ‘Honey, I’m home,’ in an
exaggerated American accent.
She grinned to herself, imagining his voice, picturing her greeting,
throwing her arms around him. Their kiss.
A sudden knock rattled the metal frame of the
fly-screen, freezing her smile. A
knock? Why would Josh knock?
She could sense the silent questions coming from the others crouching
with her and waiting for the door to open.
The door remained closed.
Another knock sounded.
‘Can’t be Josh,’ someone whispered.
Sally sighed. Who was this? A latecomer arriving at exactly the wrong
moment and quite possibly spoiling everything?
‘I’d better go.’ Annoyed, she rose from her
hiding place and hurried to the door.
But then…

Time stood still… and simultaneously, raced. Sally saw two figures
on her doorstep. Police. A grim-faced older man and a young, nervous
woman who seemed to be avoiding eye contact.

Sally saw the dreadful warning in his eyes and she was gripped by a
white-hot rush of terror.
‘I’m very sorry, Mrs Piper.’
Anything else he might have said was
drowned by the boom of her heartbeats. The man and woman on her
doorstep and the palm trees in the front garden swayed alarmingly and
then the world turned black.

Posted by Barbara Hannay at 3:42 PM 4 comments: Links to this post