Interesting marketing strategies... have resulted in totally different packaging for the same story. My next book will be released in the UK and North America in March. It's set in Australia's Cape York, in wild, rugged and very distinctive tropical coastline that's described in a fair amount of detail in the book.
In the UK it's called The Cattleman's Adopted Family and it's in a 2 in 1 with Margaret Way's Outback Bachelor (lucky me) and looks like this. 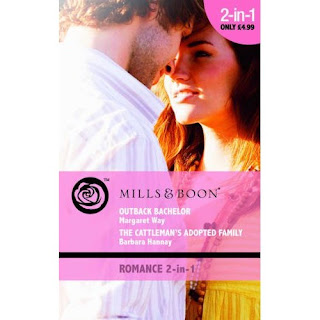 In North America, it's called The Rancher's Adopted Family and looks like this. 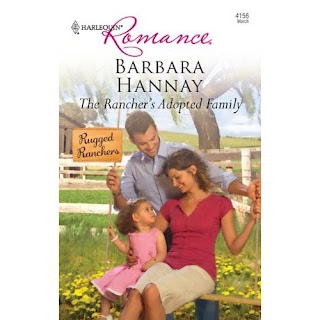 My editor loved the setting I described, but obviously marketing has its own way of thinking... I hope American readers won't feel conned.
Posted by Barbara Hannay at 4:53 PM

I can't see the second image for some reason, but it does make me very disappointed with the marketing people. As a country, we are expected to become familiar with the US conventions and culture, why can't they reciprocate?? It is a wonderful thing to be given a glimpse into the world of others. I think the Americans are just missing out and I am sad for them, and for you. It would be a very boring world if we were all the same.
And A New Book!! How exciting!!!

It's always disappointing for the author when the cover image misses the vision by a mile. And I hate it when I know that readers are going to be saying "What the...?"

At least with the UK cover you're left to use your imagination.

Ohhh, story set in Cape York territory - coming with descriptions as well!!!! You know how much I love to travel and discovering new things. AND coupled with Margaret Way!!!
How lucky can I get?!
Definitely, definitely can't wait!!

And as for the cover, well... just say that what counts is what is in the book and not on it.
I would have bought yours if it just had a blank cover, the title and, most important, your name. Don't fret, your readers know where to go.

It is disappointing when your cover is so far off the reality, Barb, I know, but it's still a nice looking cover.

So even though it's wrong and more of a picture book farm than the rugged and dramatic Cape York country, it's not ugly or off-putting, which is a small silver lining.

And perhaps you could put some pictures of the actual setting on your website. I think people would love to see that.

Anonymous said...
This comment has been removed by a blog administrator.
1:44 AM

Thanks for your comments, everyone. I think the bottom line, always, is what counts -- and having another outback book in the same month as Margaret Way is a problem. She's such a huge seller -- and she always writes about the outback, so she has first call on that niche. However, two outback books in the same month would have been an overload.
Brigitte, thank you so much !! and you're right, Anne. Photos are the way to go.