How the other half sees it...

Elliot was recently interviewed for Romance Writers of Australia's HeartsTalk magazine. This is what he had to say (and yup, I still love him):
Elliot, you are more involved with romance writing than most husbands or partners, how did that come about?
First let me stress that I don’t co-write any of Barbara’s novels, the craft of romance writing is well beyond my capabilities.
However I’m quite chuffed when she refers to me as her “first reader”.
I suspect I became more involved than most husbands because of my professional career as a journalist and editor and I’ve always been fascinated by a good story. I read my first novel when I was ten (James Fenimore Cooper’s The Last of the Mohicans by the way is not only an adventure story; it’s one of literature’s great romances).
Barbara ran story lines and pitches past me during her four and a half-year journey towards publication and it seemed natural to be involved or supportive once she was picked up.
Are there risks in being too closely involved?
Absolutely, this is dangerous ground. We are dealing with the creative thought process often under deadlines and stressful conditions.
It is so easy, even for a well-intentioned bloke like me, to silence the “Girls in the Basement” or ruin the author’s voice.
It took me a few years to realize that having two writers in the one household involved sharing a limited amount of oxygen on occasions.
That’s because we males are genetically engineered to take control, offer advice when it’s not being sought, interfere, solve problems when they don’t even exist, dominate conversations and generally act like the heroes in romance novels.
What advice can you offer to other husbands and partners?
Please guys, don’t panic if you simply want to wish your loved one well with her writing, back her 100%, but can't bring yourself to read any of the stuff. Remember we’re talking about stories crafted specially for women and not many blokes read them.
Don’t worry… she’s in safe hands with her fellow writers and RWA.
I tell anyone who will listen that my wife is in “one of the most supportive professions unknown to man”. She’s been welcomed into an amazing support group that I truly believe is unique to the sisterhood of romance writing. 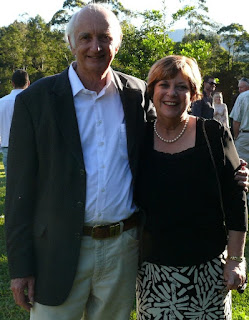 It’s hard for men to grasp, but you women share trade secrets and intellectual property, go to extreme lengths to encourage others into your profession, embrace new authors who could be expected to reduce your own market share, back each other emotionally in good times and bad… and generally have fun while doing all this.
How do you think most men feel about romance writers?
Who cares? Men don’t really count in your industry as writers, editors, publishers or consumers. I’ve stopped bristling when male friends or my colleagues ask Barbara about sending away for the “formula” or wanting to know how many novels she “churned out” last year.
I suspect many feel a little intimidated, but they do respond to statistics which males normally relate with success, and they are stunned if you quote the size and status of the market, particularly in the US.
Men tend to put down or send up anything that is slightly beyond their own intellectual property or experience.
For example, early in my wife’s career I was mixing semi-formally with old colleagues and we were trying to see what intellectual resources we could muster for a community project.” Well, there’s Elliot, he’s probably the most well read bloke in our group”. I was modestly taking in this unexpected professional compliment when my friend added “Yes. He’s read everything Barbara’s ever written”.
Sometime later, at a busy pedestrian crossing, a group on the other side of the street waved and pointed excitedly. “Look, look everyone! There goes Barbara Hannay’s husband”. If you are an Alpha male I suspect this could be difficult to handle.
You’ve been involved in RWA conferences here and overseas and accompanied Barbara to London and New York.. what were some of the highlights?
I enjoy romance conferences (and believe the Australian ones have the best karma) and I find women presenters much more skilled at imparting craft than most men I’ve listened to at corporate conferences and seminars.
But I’m also the type who’s sensitive to social gaffes and I still wake up in the middle of the night sweating with overwhelming remorse at some of the things I did or said in the earlier years.
I’m amazed that Barbara didn’t divorce me on the spot during our first visit to Richmond.
She was being hosted to lunch by two very senior Mills and Boon editors when my Alpha Male in the Basement surfaced and I offered to help them “ counter the company’s low profile in the publishing industry”.( Ok I know! But it was 10 years ago and I was only trying to help). Barbara’s recollection was that I actually suggested their books would now sell better because they had shown the good sense of signing her up.
I no longer attend luncheons with editors.
Because I also had some background in marketing I also questioned the same senior editors’ choice of title for Barbara’s first book. The hero was Fletcher and the heroine’s name was Ally. I have never seen two people more suited to each other. In particular Ally was the perfect woman for Fletcher… but he was too stubborn to admit it. I suggested “Right up Fletcher’s Ally”. They took it on board but foolishly insisted on “Outback Wife and Mother.” I still like mine better.
Posted by Barbara Hannay at 1:44 AM

Lol, what a great post. I think 'Right Up Fletcher's Ally' would have gained a whole different market ;-j

Love Townsville, it's very pretty (I used to be in Brissie and travelled through on my way up north).

What a fabulous interview and I think he is a great loss to the naming Books department!!!

Lol! A wonderful interview! I think I'm going to have to read it again...