Last weekend I decided to do some research for my rural romances and we headed out to the Mt Garnet races, which is actually a three day event, although we just went for the one day. I met writing mate Noreen Allen, there. Noreen's been going to these races for years -- in fact she met her husband there and her daughters met their husbands there as well, so you can see it is a Very Important Social Occasion for country folk in these parts. Once upon a time there were balls in Ravenshoe to accompany the races, although that doesn't happen now.
The huge camping ground next the racecourse was absolutely packed with tents and caravans and established camping shacks. I soon discovered that there are some fabulous rustic dwellings, and that most of the long established families from particular cattle stations have their own designated sites.
Tradition is king out here. 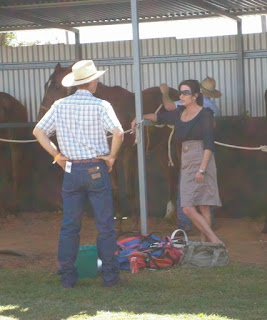 Having once owned one-ninth share in a racehorse, unhappily named Unacceptable, I was keen to make a tour of the stables to check out the hopeful contenders. 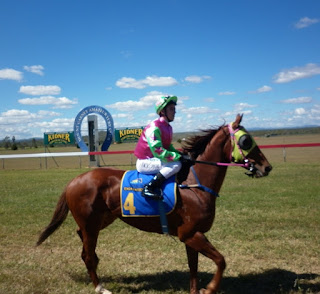 Although... to be honest, I don't really know much about racing -- but I did pick the winner of the first race -- this lovely mount. Have to confess, though, that I chose him because I liked the jockeys pink and green silks. LOL. 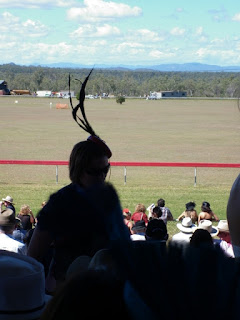 Of course, high fashion abounded with the usual collection of fabulous hats. 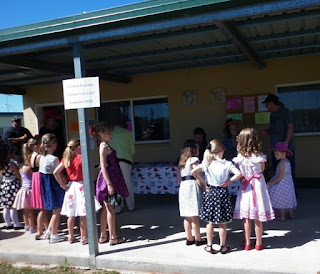 Even the sartorially splendid boys and girls were lining up to be judged for the Fashions in the Field. 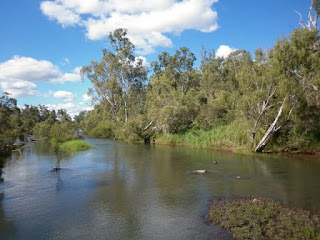 On the way home, we wandered off the main road to investigate the headwaters of the Herbert River. I do love outback waterways, as anyone who's read my books may have guessed.
And we had the added bonus of spying a flock of emus picking over a newly ploughed paddock. They're incredibly curious birds, and if you wave your hat, they'll come right over to you.
Great fun. 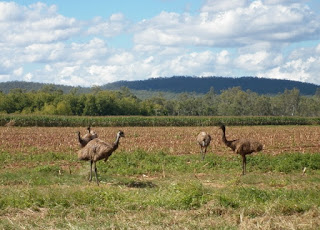 Posted by Barbara Hannay at 8:05 PM

Everything is looking so beautiful after all the rain, isn't it? Lovely pictures, and it sounds like a great day.

What beautiful pictures of the races and the land. Some of those pictures look like scenes from a book. I wonder if they will be??? Choosing a horse for the jockey's colours seems perfectly sensible!!

The "Balls" were held at Mt. Garnet not Ravenshoe. Dances were held on the Friday, Sunday, and Monday nights. The ball was always held on the Saturday. All were held in the Mt Garnet Town Hall. Once the Turf Club built their hall, dances and ball ceased and cabarets have been held since. Five generations of my family have enjoyed these race weekend.