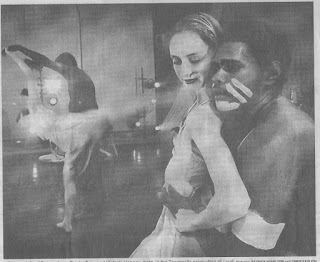 While I was packing up old photos I discovered these newspaper clippings from my daughter's dancing days.
In an artistic expression of reconciliation, the company Vicki danced with, Dancenorth, collaborated with Mornington Island Dancers to take a new piece called Luli around the country. The performance showed the two styles of dance separately in the first act and then in combination in the second half.

The show's opening was spellbinding with absolute silence -- and an Aboriginal man in the centre of the stage making fire by rubbing a stick onto bark. The anticipation in the audience as they waited for that first spark was palpable.
On tour, they travelled across the north of Australia to Broome and then through southern states. Aboriginal elders on the tour gave Vick a tribal name -- Brolga, which is a dancing bird.
Happy memories.
But I'm equally proud of my daughter these days. She's an occupational therapist working with autistic children.
Posted by Barbara Hannay at 12:51 PM

Your daughter is an amazing person Barbara.

Wow, that is such a wonderful theme for dance, and she looks so lithe and dancerly!! Fabulous job she does now too!!