Drama and dilemma in our garden... 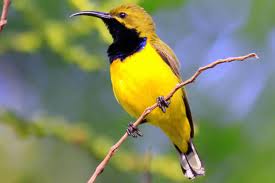 This week we've butcher bird and magpie parents with hungry babies, and we've also had sunbird parents (a seventh their size) who've woven a beautiful nest near out front door and who also have babies. Nature being the way it is, the butcher bird parents want to feed the baby sunbirds to their offspring.
So...the poor little sunbird parents have been bravely trying to frighten the big birds away and we've been beside ourselves with nervousness.

Meanwhile the baby sunbirds have been oblivious to their danger and quite happily sitting in the doorway of their nest waiting to be fed, and trying to catch passing flies. (Can you see them there?)

Yesterday morning, we woke to find that they had gone and we hoped madly that they were safe. The nest was still intact, so we didn't think it had been robbed.

Then this morning E made a new exciting discovery. The clever parents have staged a halfway house for their youngsters, in this dense shubbery. From here, the babies can forage for their own food and test their wings while their parents bravely fight off any bombing raids.

Such devotion and ingenuity. I'm in awe... 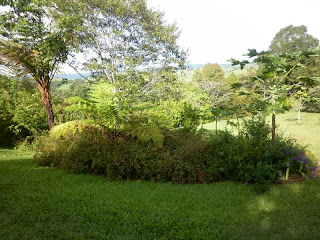 I can see the baby birds and though it is Nature, I am so glad their parents were smart and their babies are safe!!!

Fabulous news, Barb. We were devastated when a butcher bird took our resident sunbirds' nest down...

Your pair must be a wily couple of survivors!

Oh, Helene!!! I can imagine your devastation. Yes, it's Nature... but still so sad.