We came back to the city on Wednesday, with considerable reluctance, but also with produce!!!! Peaches (yes, from a tree we'd planted), tomatoes and fennel from our veggie patch, as well as bags of basil and parsley. Ooh, we did feel pleased with ourselves.

Within an hour of being back in the city, a fellow tried to commit suicide by leaping off the top of our apartment block. He smashed windows in the lift well and there were police sirens blaring and police everywhere, and fortunately they prevented him from jumping. But what a contrast from our peaceful idyll at Tarzali.

Not that it's all bad here by any means. Lovely to see family. Our son linked up his laptop to the TV so we could watch Barack Obama's history making acceptance speech on YouTube, because we missed it during the drive down. And this weekend there's the Sydney Travelling Film Festival in Townsville. I have a lot of writing to do, but I do hope to get to see a couple of these fabulous films, especially the Italian film, My Brother Is An Only Child. Isn't that an intriguing title? 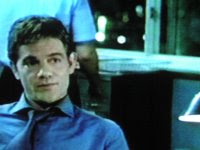 Did anyone watch Taggart last night? I loved the tension/conflict between Robbie Ross and his wife. It gave me inspiration for developing more conflict in the second half of this story I'm trying to fix up.

Posted by Barbara Hannay at 1:01 PM

Yes I did watch Taggart and I was hoping that Robbie would get back together with bis wife, but in true tragic heroic form , he didn't. I knew in my heart of hearts he wouldn't either.
I really like Taggart, there are enough glimpses of their private lives to keep me interested, but not enough to turn it into a soap opera.

I guess when I said I loved that tension, I was only speaking from a writerly POV. I found it inspiring. But yes, sad. Tragic, like the movie 'Prague' that I watched on Sunday.