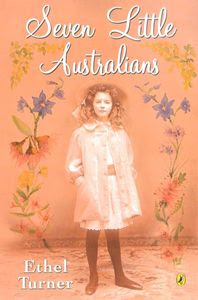 My granddaughter is reading Twilight. Apparently it’s all the rage in Yr 4.

I was a little stunned when I heard this until I remembered that the romance in Twilight is very “sweet”…
and I remembered also that Yr 4 was the year I totally “tuned in” to books.
It was the year I read the ever memorable Seven Little Australians by Ethel Turner. This book was written in 1894 (No I'm not really terribly old; my aunts gave me these books) when its author was just 24! So she was young and talented just like Stephenie Meyers of Twilight fame. 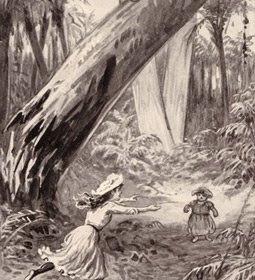 How I LOVED Seven Little Australians. Apart from the scene, which is forever seared on my brain, when the tree falls on Judy, there were romantic scenes too.
Meg, the oldest of the seven, falls in love with Alan, after certain mishaps.
She’s led astray by a flirtatious school friend, you see, and there’s a fabulous scene when she leaves the house at night and goes down to the river for a romantic tryst with Andrew Courtney – she’d sent a note to A Courtney – but his older brother Alan turns up instead.
Let me give you an extract…

There was a smell of cigar, and, looking closely, she saw to her horror that it was Alan.
Her heart gave one frightened, shamed bound, and then seemed to stop beating altogether.
She looked up at him, as if entreating him not to have too bad an opinion of her; but his face wore a contemptuous look she had grown to dread, and his lips were finely curled.
‘I – I only came out for a little walk; it is such a beautiful evening,’ she said, with miserable lameness; and then with a tone of justification she added, ‘it’s my father’s paddock, too,’
He leaned back against the fence and looked down at her.
‘Flossie gave me your note, and as it seemed addressed to me, and I was told it was for me, I opened it.’
‘You knew it was for Andrew,’ she said, not looking at him, however.
‘So I presumed when I read it,’ he returned slowly. ‘But Andrew has not come back tonight yet, so I came instead; it’s all the same, as long as it’s a boy, isn’t it?’
The girl made no reply, only put her hand up and drew the cloud more closely round her head.
His lips curled a little more.
‘And I know how to kiss, too, I assure you. I am quite a good hand at it, though you may not think so. Oh, yes, I know you said you didn’t want to be kissed, but then, girls always say that, don’t they? – even when they expect it most?’
Still Meg didn’t speak and the calm, merciless voice went on:
‘I’m afraid it’s hardly dark enough for you, is it? The moon is very much in the way, do you not think so? Still, perhaps we can find a darker place farther on, and then I can kiss you without danger. What is the matter? – are you always as quiet as this with Andrew?’
‘Oh, don’t!’ said Meg in a choking voice.
The mocking tone died instantly out of his voice.
‘Miss Meg, you used to be such a nice little girl…’

Of course, Alan doesn’t kiss Meg, who is sixteen. He gives her a stern lecture and humiliates her thoroughly… but marries her at the end of the next book… sigh…

Looking back, I know all the girls’ classic books have influenced me. In fact, this Seven Little Australians story takes place in both Sydney and an outback sheep station – so quite possibly it resonates deeply in me in many more ways than I’ve realised.
I went on then to read the rest of Ethel Turner, as well as the Anne books, (in Yr 5 I asked a girl to be my "bosom companion' and she looked askance and fled. She wasn't a reader and we didn't stay friends:) There were The Little Women series, the Katy books etc.. all romances really...
This last illustration is of one of the seven "naughty" children washing kittens.
Do you have a stand out book from the past that has stayed with you in vivid detail forever? 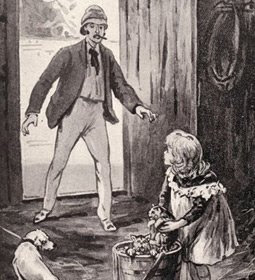 Oh yes, Seven Little Australians: so sad when Judy saved the Baby. I loved the Katy books, The Anne books, The Story Girl, Dimsie and all the nurse books too. Oh yes, the Little Women series. I longed to live in a boarding school and to do all those things I read about. Then when I was about 10 my dad arranged for me to have an Adult Library card and I graduated from the Blue Fairy Tale books(there was a series of colours) to the Yellow Gollanz Sci-fi and Fantasy section!!!

I was and am a read-aholic. I started with the Bobbsey twins, Laura Ingalls Wilder, Anne of Green Gables, Chronicles of Narnia, Jane of Lantern Hill and Emily, and then I graduated up to Tolkien and Austen. All of my copies are sad-looking and much-loved and I haven't been able to part with them, even when it was hardly convenient to cart them from place to place.