Monday morning was such an exciting morning for us!!! We had to be at the hospital for an important date -- the birth of our little granddaughters.

Yes, Lilly is now the big sister of twin baby girls. Not that she was there, on that morning. It was just the two sets of grandparents plus Andrew and Addy.
It was a reasonably long wait and we were all chatting away, trying not to look worried or the slightest bit anxious. And suddenly my son Richard appeared in green scrubs, with a huge smile. Within minutes, he was taking us into the nursery to meet Sophie and Milla. So perfect and sweet, lying together in a crib, holding hands. Is there anything in this world as precious as a newborn baby? Such an exciting moment.
I hope to bring you a photo of that moment soon, but for now, here they are a bit later, after gastro tubes were put in. For now, their mum, Lauren, is expressing her milk and it's being fed down the tubes. But I'm sure that won't be for long.

These little girls might be tiny but they're really strong. Watch out world! 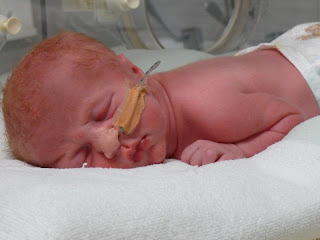 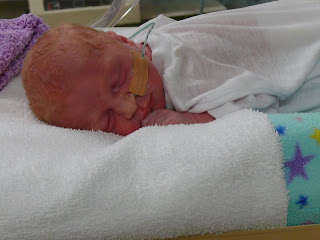 Milla (above) and Sophie (below)

And in perfect timing I've just completed my duet, Baby Steps to Marriage.
Expecting Miracle Twins and
The Bridesmaid's Baby
will be out in September and October 2009.
Posted by Barbara Hannay at 1:09 PM 6 comments:

A moment on Christmas Day...

In case there's anyone out there surfing... I'm grabbing a moment on Christmas Day... yes, I actually have a free moment. My Christmas hasn't gone to plan. I'm not down south as I expected to be, but I'll tell you about that some time in the future.

It's hot here in Townsville at Christmas and our a/c is going overtime. We've already had family over for breakfast and for gift exchanges and shortly we'll be heading off to join extended family (daughter-in-law's family) for the main celebrations. We have ducks sizzling in the oven (that's our contribution) and I've made rum balls and Christmas truffles and we'll be drinking mango daiquiris. Well, we do live in the tropics. Yes, we hanker for a traditional Christmas and snow and holly -- but you have to work with what you've got, don't you? We'll be happy. I bought DH his personal mountain of books for Christmas. He's happy. Hope you're all having a lovely day.
Love from,
Barbara
Posted by Barbara Hannay at 5:10 PM 2 comments: 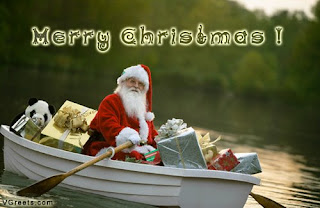 Wishing you love and health, good friends and happy reading. 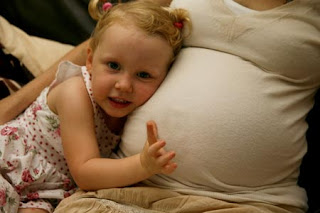 Yes that's Lilly and her mum's tum... an extra level of anticpation creeping into our world this Christmas.

A mother moment... mind the brag.

Those of you who have read Blind Date with the Boss may have noticed the dedication at the start.

Special thanks to my daughter Victoria, who knows how to dance.

For quite a few years, my younger daughter (known to most as Vicki, except her older brother who calls her Vixen, natch) used to be a professional dancer with Dance North, and so when I wanted a scene in this book where the heroine Sally, teaches Logan, her boss, how to dance, I immediately turned to Vicki for help.


By this time, Vicki had given up dancing and was busy in the middle of assignments at univeristy, but she downed tools to help me -- even wrote a possible scene, much of which I've used. That cheeky question that Sally asks, "Do you know how to count, Logan?' was Vicki's. So are the descriptions of what it feels like to waltz.
So again, a huge thank you, Vick!!!

She's a creative type, makes gorgeous cards and mobiles. This is a fire hydrant in Brisbane that she and her boyfriend painted. (The one on the right) 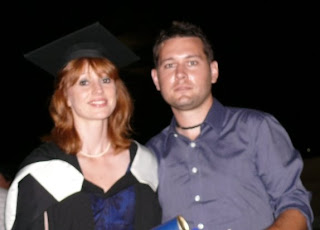 But last week, Vicki gave us an extra reason to be very proud of her. She graduated from the Univeristy of Queensland's Occupational Therapy course with first class honours and a prize for jointly scoring the highest grade point average over the four years of the course. Better still, she's going to work for Autism Queensland, as part of their Outreach Team, helping teachers and autistic kids all over the state.
My kind of heroine.
Posted by Barbara Hannay at 3:35 PM 5 comments:

I’ve been in a kind of post book haze, catching up on all those things I put off while finishing the second book in my duet – like sleep and paying bills and Christmas shopping and making my Christmas cake. Of course, there was the added delight of having Lilly's help in the kitchen. 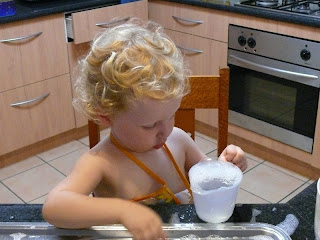 On the weekend we made a hasty trip to Tarzali for a quick check. There'd been a wild storm up there, so we had broken tree branches to clean up as well as the usual mowing and weeding. In the wet tropics, grass and weeds are the gardener's enemy, but with drought elsewhere, we're not complaining.

Our Tarzali neighbours are currently caring for this dear little orphaned wallaroo (joey). She's called Ellie and she has been very sick, but is now doing very well and eating grass. She sleeps in a towel-lined bag with a slit in the side like her mother's pouch. Isn't she sweet? 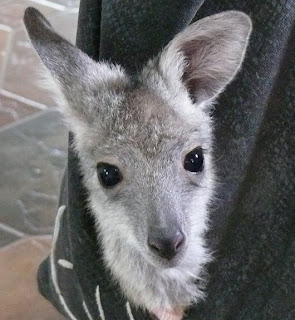 On the way back from Tarzali, we photographed this roadside sign that someone has decorated for the festive season. It's out in the middle of nowhere -- so Aussie, isn't it? 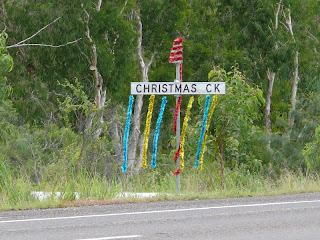 Soon, we're dashing south to catch up with the southern half of our clan. As I now have wireless broadband, I hope to keep you posted. Fingers crossed that this year we aren't washed out the way we were last year, as we have to make it back for an important family event. Will no doubt be doing revsions in the midst of all this dashing about.

But at least I'm better off than the Australian author languishing in a Thai jail, because he wrote one sentence in his book that offended the Thai royalty. I'm inclined to agree with his lawyer who said..." it's about time the Australian government put Harry Nicolaides' human rights before its relationship with the Thai government."