Meet Me in Venice

I'm really excited to be sharing the beautiful front cover and the back cover blurb, plus an excerpt from my new book Meet Me in Venice (to be released on August 6th and currently available for pre-order) 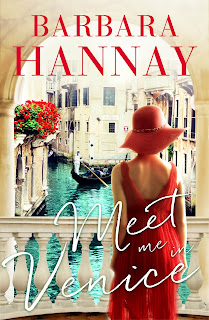 How could you live such an ordinary, respectable life
and then leave me with such a mystery?

A year after her husband Leo’s death, widow Daisy invites her three adult children to join her for a holiday in beautiful Venice. It will be wonderful, her chicks under one roof again in their father’s birthplace. But is it possible to recapture the past?
Marc’s marriage is in jeopardy, but for his mother’s sake, he convinces his wife to keep up appearances. Anna’s trying to hide the truth about the dismal state of her London acting career; and Ellie, enjoying a gap year and uncertain about her future choices, wants to avoid family pressure to conform.
Despite the magic of Venice, family ties are tested to the limit, especially when a shocking secret from Leo’s past is revealed. Now everything they value about love, family, commitment and trust must be re-examined.
How can one family holiday require so much courage? Will Daisy’s sentimental journey make or break them?
From multi-award-winning author Barbara Hannay comes a moving and heartfelt family drama about difficult choices and finding happiness in the most unexpected places.


Check out the excerpt...