Readers, can I direct you to Liz Fielding's blog to read an interesting take on secondhand books from the writers' and publishers' point of view?

It's not just that we miss out on royalties when books are available secondhand online before they reach the stores. Liz has actually worked out that it's cheaper to buy the book new in the store than to buy it "used" and pay for postage.

Has it really been a whole year?

Yep. Lilly had her first birthday on the weekend. Hard to believe it was a year ago that we waited anxiously to hear of her safe arrival five weeks early. Will her daddy ever forget that midnight dash, following her ambulance from the Mater to the General, because her breathing needed extra monitoring? 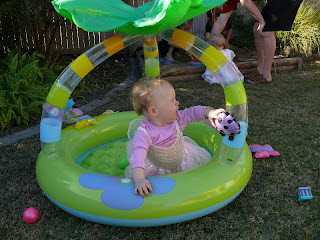 But here she is now, a little livewire, getting her fairy dress (bought by doting Auntie Emma) dirty in the sand pit. 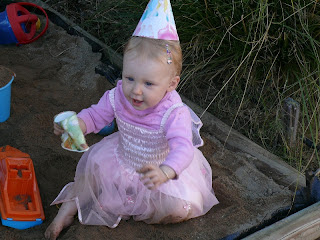 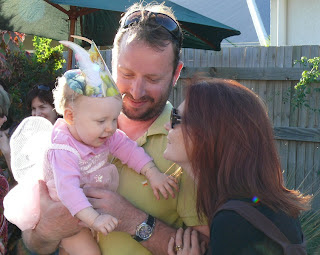 Coming Back to Earth... 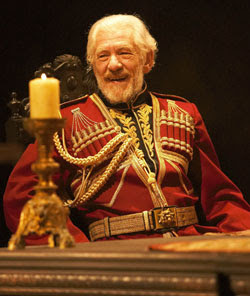 There's nothing like a set of revisions to make an almost smug author come back to earth with a bang. I don't even have my RITA yet, but the party's over. I have to fix up my current heroine.
Actually, listening to Sir Ian McKellen being interviewed on TV last night helped me to understand why.
He was being asked about playing in popular movies like Lord of the Rings and X Men rather than Shakespeare (he's currently touring King Lear) and somewhere in his answer he mentioned that people love popular movies, because the characters are good and brave and face up to things we wouldn't want to face in real life.
I knew that, didn't I? But I think maybe I let a little too much reality creep into Nell's story and I need to go back and lighten her up. Let her laugh more at her troubles. I think I made her too much like me. (grin)
I read somewhere recently that a very popular author imagines her reader coming home from a hard day's work and curling up in a chair with a cuppa, while she forgets about the rotten day she's just had. I'm trying to write for that reader, too. Wish me luck.
Posted by Barbara Hannay at 2:36 PM 2 comments:

And now some pics...

Marion Lennox sent me these exciting pics of RITA night at the Romance Writers of America Conference in Dallas. 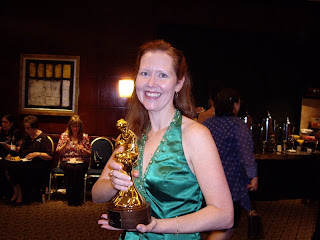 This is the presenter (I'm afraid I don't know her name) who handed over the golden lady to my editor, Kimberley Young. 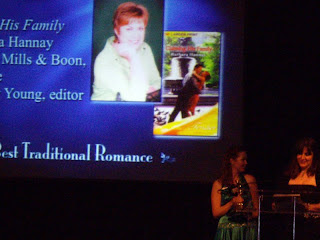 Kim Young (lower right, beneath the huge screen) delivering the acceptance speech on my behalf. A lot of people have asked if I wished I was there. Well, yes, but I am so, so grateful to Kim. I don't think she cried, but there's a very good chance that I would have. (grin) 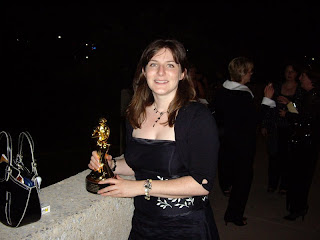 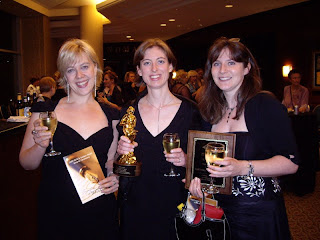 Editors raising a glass. (I'm guessing that the one on the left might be Maddie Rowe.) Centre is Meg Sleighthome, my current editor and right Kim Young, who edited Claiming His Family and who is holding her editor's RITA plaque.

Lovely Marion Lennox has RITA tightly packed in a box after the long flight back from the States and she will be taking her in situ to Sydney for the Australian conference in August. Apparently, RITA's a very difficult lady to travel with, so she'll have to go back in the box. I don't think I should indulge in the pleasure of nursing her all the way back to Townsville.

The sad thing is, this was the very last time a RITA will be given for Traditional Romance. Too many sweet romances (including many of mine) now have sex scenes and Trad was all about no sex before marriage. This area ia catered for these days in America by Inspirational Romance. Sign of the times...
Posted by Barbara Hannay at 5:28 AM 8 comments:

Crikey! I won a RITA!

Well I'm back in town, there's a story about the RITA in the local paper, I've been interviewed on the local ABC and it's finally sinking in that I won!

But I can still see myself standing there on our Tarzali hillside in my gardening clothes, one gardening glove ripped off so I could press buttons on my mobile, and reading Marion Lennox's message: You won! x x x x x

Gorgeous and generous Marion, who was a double finalist and within a hair's breadth of entering the Hall of Fame (if she'd won her 3rd RITA) took the trouble to text me the message as soon as it was announced at the awards ceremony. And then later, as soon as the ceremony was over, she rang me with editors Kim Young and Meg Sleightholme, so I felt totally included.

And blessed. Very grateful to have this wonderful job, to write stories I love, to have wonderful writer friends, sympathetic and clever editors and to have my husband's support to do this job as fanatically as I wish. 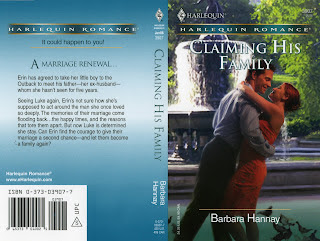 Actually, Elliot inspired my favourite scene in Claiming His Family, a scene where Erin, Luke and Joey sit in the middle of a paddock and wait for a line squall of rain to wash over them.
Elliot used to do this with our kids when they were little. They'd sit on our front footpath and watch the rain coming across Townsville from the west, hear it drumming on the rooftops as it approached, smell it hitting the dust. They would squeal and try to run inside, but he would urge them to stay there (in summer) till the rain reached them and then they would squeal and dance with excitement.
Living in the dry tropics certainly teaches you to enjoy and appreciate rain in a way many people wouldn't understand (-- although in these days of climate change, it's SE Queensland that's dry.)
Posted by Barbara Hannay at 3:27 PM 3 comments:

OK, it's been a busy week in the city with my Mum visiting -- concerts, movies, dinners, shopping. My mother, at 81, is amazingly energetic. But for me the most exciting thing is that I've also embarked on an endeavour I've been promising myself to undertake for years now.
I've begun investigating my family's ancestry.
With Mum's visit as an incentive, I went to the Townsville Family History Association and my adventure began.

My head is now buzzing with names and places and shipping lists. We didn't know much at all about Mum's family -- and all I want to know, at this stage, is when our ancestors came to Australia, where they came from and what they did there.
I've already tracked down one family who came out from Cambridgeshire in 1853 and as you can guess, my imagination has taken flight as I picture them on that boat, the David McIver -- young husband and wife with six children, including a baby (after leaving two babies buried back in England) taking that long sea journey to the other side of the world. Only the mother and one son could read and none of them could write.
I've also discovered a great-grandfather who was a German national and naturalised as an Aussie just before his marriage in 1891. It's like doing a huge jigsaw puzzle and just as addictive. Yeah, I'm hooked!
Tomorrow we head to Tarzali for a few days. Frosts are predicted, so the fire will get another workout.
Posted by Barbara Hannay at 1:39 PM 7 comments:

My Mum arrived here yesterday. She loves coming to Townsville at this time of year because of the Australian Festival of Chamber Music.
And after several concerts, we'll be off to Tarzali, which she loves, so I may be a little quiet here.
In the meantime, Liz Fielding will be hosting a series of promotions about the Traditional category of the RITA finalists on her blog. I'll be there with an excerpt from my finalling book, Claiming His Family, along with Jackie Braun, Fiona Harper, Marion Lennox and Sandra Paul and Liz is running competitions to win copies of our books, as well as giving a taste of our next book -- so lots of information there.

Wish us all luck! I'm sure we all deserve to win. (grin) Fiona and Marion are off to Dalla, so I'm sure they'll have a fabulous time. I'll be pulling weeds at Tarzali and thinking about them.
Also, right now on Liz's blog, you can read an excerpt from Book #1 of our SECRETS WE KEEP trilogy. Have to dash and make Mum her morning cup of tea.
Posted by Barbara Hannay at 1:46 PM No comments:

OK, I'm an Australian of Scottish descent and I have no cultural links to Cherokee people, so I can't claim any ownership of this, but I read it recently and I think the universal truths encapsulated here are worth repeating.

One evening an old Cherokee told his grandson about a battle that goes on inside people. He said: 'My son, the battle is between two "wolves" inside us all.

The other is Good. It is joy, peace, hope, serenity, humility, kindness, benevolence, empathy, generosity, truth, compassion and faith.'

The grandson thought about this for a minute and asked his grandfather, 'Which wolf wins?'

The old Cherokee simply replied,
'The one you feed.'
Posted by Barbara Hannay at 3:41 PM 1 comment:

I’ve just had a few magic days away in our beloved Misty Mountains. The rain stopped virtually the minute we arrived and didn’t return during our whole stay, so we had clear, crisp, cool days, perfect for gardening. The nights however were cold!!!!

The Cairns Post reported that it was -7 degrees Celsius at Ravenshoe (the highest town in Queensland). I don’t think it was quite that cold at our place, but we had ice on the car and frost on the ground – two firsts for me! Our wood fire was very much appreciated and kept our cottage beautifully snug and warm.

We returned on Saturday, stopping off at our favourite funky café, Off the Rails at South

Johnstone, for lunch. We were a little early, but hung around until their sensational three cheeses and spinach pie came out of the oven.

On Saturday night we attended Tropic Sun Theatre’s production of Othello. It was supposed to be played in Queen’s Gardens, but it has been too cold and wet, so was transferred to the Cowshed at James Cook University. 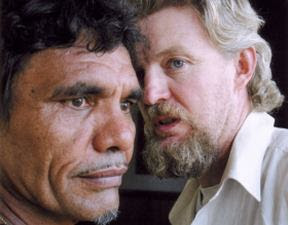 It was fabulous. I’d never seen Othello before and what a riveting play it is. Othello was played by Tom Lewis, the Aboriginal actor who starred in the movie based on Tom Keneally’s book, The Chant of Jimmy Blacksmith. Andrew Hare who played Iago was also superb.

I love watching actors stay in character from the minute they step onto the stage. And I love watching their characterization deepen as the play goes on. Another actor I am fascinated by because of his deep characterisation is Philip Glenister in Life on Mars. He has developed the character of the bad cop Gene into such a larger than life figure with his long overcoat, undone shirt collar and permanently loosened tie, his constant petulant scowl and twisted sneer.

It amazes me to remember he is the same actor who was the equally appealing but so very gentle Captain Dobbin in Vanity Fair. Swoon.

Anyhooo… Yesterday and today, are my days for reading through Nell and Jacob’s story and giving it a final polish. Tonight, I will kiss them goodbye. But I won’t have time to miss them too much as Lilly and her parents are coming to dinner and Elliot is cooking his magical twice cooked duck.:)