You might remember that I reported a few weeks ago that our mother turkey had hatched a turkey chick. We ended up with two chicks and... a duckling! (Yes, hatched by the turkey!)
Unfortunately, she wasn't the best mother, so we kept the babies in a box in the house under a light for their first couple of weeks, and then they were transferred to a "nursery cage" where she resumed her "mother role." 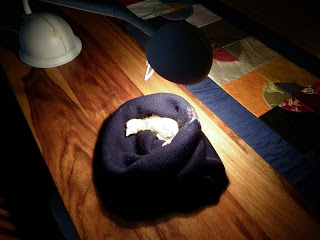 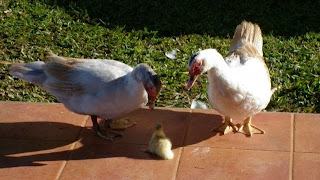 Today, was the babies' release day, into the wild (well our yard, anyway). The ducks pecked and harassed the poor duckling at first, but then calmed down, but he stuck close to his turkey mother. So far he hasn't discovered the duck pond. I can't wait for that.