How one author celebrated her RITA nomination

I’ve been away at Tarzali for a few days and while I was there, I received the fabulous news that Claiming His Family has finalled in the Traditional section of Romance Writers of America’s RITA competition.

In the world of romance writers, this is the equivalent of being nominated for an Oscar, so I was a tad excited. Elliot was determined that we must go out to celebrate. That guy will grab every possible chance to celebrate!

“But it’s Monday night,” I tell him. “Nothing will be open up here.”

And so we set off.

Now the Tablelands, for those who aren’t familiar, have villages (for want of a better description) all about twenty minutes (driving) apart. We headed off from Tarzali (home of The Round Bar) and went through Malanda (which has quite a good a pub and a motel with a restaurant) intent on finding one of the cute, little, yuppie dining places at Yungaburra – the Burra Inn, Eden House, Nick’s Place, Flynn’s etc.

On the way, we barely missed running over an echidna but arrived safely and, as I predicted... every eatery was in darkness.

“Oh, well, we’ll have to go to the Chinese place at Atherton,” says Elliot, trying to sound disappointed, when I know that secretly this was where he was hoping to end up.

But, what do you think, dear reader?

The Chinese place at Atherton was closed too.

“See!” I exclaim in my best I-told-you-so smug voice.

We drove on in a more subdued mood to find the only places open in Atherton were a pizza shop or KFC. KFC won. Don’t ask. OK?

We drove home through the night, munching hot, salty, potato chips and finally, quite late and wrapped in a pashmina, I sat on our veranda and ate the chicken and drank some champagne and together we watched the beautiful starry sky.

And it wasn’t such a bad way to celebrate the RITA nomination after all.

Posted by Barbara Hannay at 2:38 AM 10 comments: Links to this post

Yesterday my family had a very exciting day. We were able to give Elliot his extra birthday present, a painting we'd commissioned Peter Lawson, a north Queensland artist, to create. (Yes, Peter is related to Australia's famous writer, Henry Lawson.)

The painting was my son Richard's idea and we sent Peter lots of photographs of Elliot and his beloved haunt, the Burdekin River, where he loves to canoe and fish and where we all spent many very happy camping holidays when the children were young.

In fact, my first book, Outback Wife and Mother, was set on a cattle property on the banks of the Burdekin. 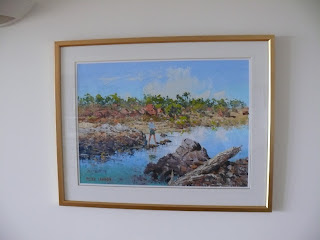 We didn't want a portrait as such -- just a scene with Elliot in it. And we're just thrilled with the result. I confess, I cried when I saw it, just knowing how much he would love it, which he does.
Posted by Barbara Hannay at 4:37 PM 6 comments: Links to this post

I’ve been doing a lot of reading about Townsville during the wartime and I’ve found it absolutely fascinating. The 1940s seem so long ago (and no, I was not born then!) but we’ve been in Townsville since 1972 and have seen so many changes that I’m sure I can feel how it must have been here during the war.

I walk along the Strand, which is so beautiful and landscaped now, with wide walkways and bike paths and gardens and tree plantings, and I can imagine how it was in 1942 – a simple beach with a narrow bitumen road running beside it, the sand littered with barbed wire barricades, as were the streets of North Ward. There were up to sixty military vessels moored in the bay. Huge guns manned Kissing Point. Schools were closed, families evacuated south. Americans arrived in their thousands and outnumbered Australians three to one.

The people of Townsville waited in trenches dug in their back yards during three Japanese air raids. Actually, the air raids were a bit of a fizzer and by the third raid, most people stayed in their beds or went to some vantage spot to watch the dog fight with American Airocobras.

Now we are fighting in a completely different arena. John Howard is signing treaties with Japan and the US and my son is going to Japan to work for six months.

I will never understand war.

But I love this photo below of Townsvilleans celebrating outside the station at the end of the war in 1945. See the big VICTORY sign on the front of the building? It was decorated with red, white and blue lights, and recreated during VP50. Fab! 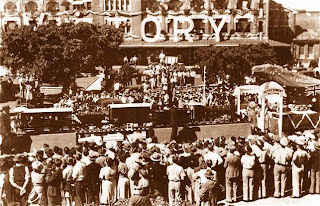 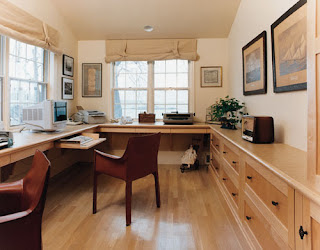 I think it's time I tidied my office. I mean, how long can I hide behind the excuse that I'm too busy?

I've finished the book. I've been away for a break. I'm in the early stages of another book. Any minute now, I'll be so involved in that book I'll think I'm too busy to tidy.

And my office is so bad that I'm not even game to show you how it looks. No, that is not mine pictured above.

My printer is still covered in the manuscript from my last book. My cork board fell down from the wall about a month ago and it's still propped on the sofa along with the collage from the last book, as well as my Alpha Smart and about twenty books. There's a scattering of photographic equipment and foreign editions and books, books books everywhere. One thing's certain, I really need to buy another bookcase. Oh, and a bigger office. Maybe like the one above - but with bookcases?


Funny though -- how quickly we get used to having such things as an office. Until my children left home, I never had more than a corner of the bedroom, or a small desk in the foyer right next to the front door. And I was very productive and much tidier then.

I might show you a photo when this office is tidy. Now that's incentive. And if the feng shui theory is correct, my work will be much more effective in a tidy office, too. Here's hoping!
Posted by Barbara Hannay at 1:56 PM 2 comments: Links to this post

Back again and ebooks

I've been away for a week. Had the BEST time retreating, brainstorming, writing, talking, eating, laughing, drinking and going for long walks with romance author friends.
Wow!
It was exactly the kind of restorative time I needed. I'm bursting to get on with my next book and the one after that and...
You get the picture!


Have just discovered that In the Heart of the Outback is available as an ebook. 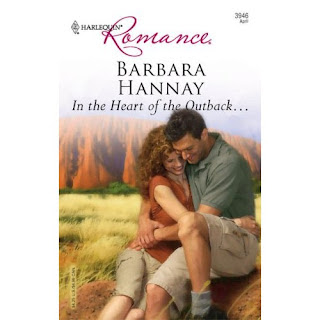 Check out this link.


I guess ebooks are the hot new things. One of my friends has an ebook reader and has decided that this way she can buy as many books as she likes without her husband knowing.


It would certainly solve the problem of my TBR pile which is vying for height with Mt. Everest.
Posted by Barbara Hannay at 7:33 PM No comments: Links to this post

There really are some wonderful things about living in the heart of the city. I've seen several movies in the last few weeks and I just walk two blocks to the cinema. Also our Townsville Cinema group has started up again for this year. I actually have to drive to that theatre (gasp!), but they serve the yummiest choc top ice creams and the movie was superb. "Live and become" about an Ethiopian boy whose mother sends him with Jewish refugees to Israel. He is adopted there by an Israeli family and it's the story of his life and adjustment. It doesn't sound too exciting, I know, but believe me it was riveting and so poignant, I cried.

Early tomorrow morning, I'm doing one of my very favourite things -- jumping on a plane and heading south. And today was frantic, with so many last minute purchases to be made before packing. But how cool is it to be able to walk to the end of my block and find an ATM, a newsagency, a chemist, a bottle shop and bakery, a hairdresser and a supermarket?

Yes, I do love the convenience of city life when I'm here, but then in the country I love that, too. I'm a typical Pisces -- 2 fish with their tails tied together, swimming in opposite directions.

And the city's not all good. We are currently collecting samples of soot on our balcony to be tested, as Elliot's concerned about pollution from the port.

On the plane I'll be reading "The Memory Keeper's Daughter". I sneaked a look at the first few pages and I can't wait to read the lot. I'm sure it's my kind of book.