Still not on line...

Apologies for my absence here. I still don't have internet on my computer. Have had several stressful phone calls with Telstra and hope this will be resolved shortly.
Meanwhile, can I direct you to a lovely report about Tasmania on Anne Gracie's blog.

Or this brilliant explanation of creating engaging characters on Jessica Hart's blog. 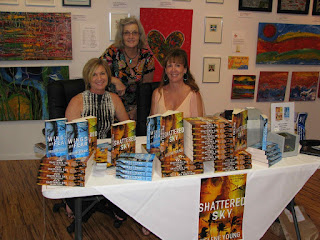 On Sunday we have to drive back to Townsville for meetings. I'm not looking forward to travelling through Tully and Cardwell.
Posted by Barbara Hannay at 1:17 PM 1 comment: Links to this post

A little bit of promo... 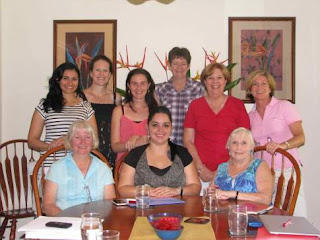 Today our North Queensland face to face group and our coming Roadshow are being featured on Romance Writer's of Australia's blog. Please feel free to come on over and say hi.
Posted by Barbara Hannay at 2:29 PM No comments: Links to this post

This one day seminar will be held at the Cairns Colonial Club on May 28th, and we're very excited that two fabulous speakers -- Anne Gracie and Kelly Hunter -- will be joining Cairns romantic suspense author Helene Young and me to give a day packed with the best writing workshops ever (in my humble opinion. -:)

I'm still on my husband's computer and blogger isn't cooperating very well, so I can't show you pictures.

The whole idea of the roadshow is to bring a conference-like experience to writers in the more remote regional areas, and as this year's annual conference is in Melbourne, RWA's president, Alison Ahearn, thoughtfully invited NQers to take up the chance to have their own event!!

Topics to be covered...


Find out more about the Roadshow and how to register on the Romance Writers of Australia Roadshow page. And don't procrastinate... places are already filling fast.
BTW-- anyone trying to email me right now should do so via my website email.
Posted by Barbara Hannay at 5:03 PM 1 comment: Links to this post

I’m borrowing my husband’s computer. We’ve been without power for five days and now it’s back on, but as soon as I reconnected, even though I have a surge protector, the battery in my Telstra wireless broadband USB blew up. I mean it literally swelled and popped! But I wanted to thank you all so much for the wonderful messages of sympathy and support. I caught quite a few of them before we lost power, and then… found the rest, waiting… and I felt very connected to a wonderful bunch of people.

As you probably know by now, Cyclone Yasi was a force to be reckoned with and our near neighbours in Cardwell, Tully, El Arish and environs have suffered terribly. The damage would have been so much worse, however, if Yasi hadn’t decided to duck to the south before crossing the coast, thus landing midway between Townsville and Cairns, North Queensland’s two largest population centres.

Also, Yasi slowed down as she approached the coast and arrived at low tide instead of the predicted high tide, so the terrible storm surges weren’t quite as devastating as they might have been. Even so, the damage has been horrendous.

For us, the final day of preparation was frantic as we scurried to clean up the yard. We had so much junk lying around –and yikes! I disturbed a venomous black snake while moving some timber!

We battened down windows and doors with Premier Anna Bligh’s warning of a “fearsome and deadly storm” ringing in our ears. I packed a bag with medical supplies, a change of clothes, our insurance documents, my USB stick with my work in progress… and we might have evacuated if we’d had more time, but it took us all day to secure the house and yard. Besides, we knew our house was newly constructed to cyclone standards, and we were in the mountains (although only 40 kms from the coast as the crow flies)… plus we knew the roads would be closed after the cyclone had passed and we wouldn’t be able to get back. With visions of a week’s worth of rain pouring in through possibly gaping windows, we opted to stay.

Our car was parked in the garage, backed right up to the door, with Elliot’s swag wedged in to take the pressure – as we’d heard that roller doors often blow in.

We let our guinea fowl go. That was a difficult decision but I had visions of the poor things being blown up against the wire of the cage and badly injured. Freed, they took off for the long grass in the paddock next door and hunkered down, and the next morning they emerged from the grass without any signs of trauma.

Did we have an escape plan?

If things got bad, we would hide under the bed – or in the bath with a mattress over us. In the very worst case scenario we would run to the garage and get into the car. Thank heavens none of these options was necessary.

We lost power at about 2.30 on Wednesday afternoon just as the winds and the rain started to pick up intensity. The storm lasted twenty-four hours – the worst of it happening between 6 pm and 6 am, with the very peak of its ferocity between 1 am and 2.30 am. But because our house didn’t budge or vibrate or show the slightest sign of weakness, I felt surprisingly safe. Not scared at all, which is amazing, because I’m not a brave person. We had a gas lamp glowing and the radio playing and we even tried to sleep in snatches.

The ABC radio was brilliant. I heard so many people sharing stories – the woman who put her phone number on her horses, then broke down while telling the radio announcer about it. A man alone in his house at Mission Beach pacing up and down the hallway, clearly terrified, gaining a little strength just by being able to talk to someone.

We were dreadfully worried about our neighbours who have two huge (I mean ginormously HUGE) pine trees towering over their house. We’d tried to get them to shelter with us, but they’re independent county folk and would only come if they had no choice – like a tree had already fallen on them and they needed to hack their way out through the floorboards with a chainsaw. I know… I know…

As it turned out, we had the very edge of the really bad winds (incredibly noisy – howling is too tame a word) but although smaller trees fell down, the big ones stayed firm. Blogger doesn't seem to be cooperating so I can't show you other pics. 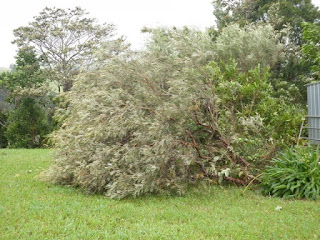 Some people might wonder why we live in such a dangerous part of the world with wild cyclones, man-eating crocodiles, venomous snakes and deadly sea stingers.

I must admit, although we’ve lived here now for nearly forty years, I’ve spent the first half of that time, hoping to return to the south one day. In fact we did return south for a few years… and then came back.

And now I’m pretty sure I’d really miss the north if we left. I loved Heather Brown’s article Tough Breed in The Weekend Australian.

To quote her she says: I am a Queensland northerner, born and bred, and for better or worse I carry 100 years of history in the blood, 100 years of family crazy-drunk in love with a wild and unpredictable place.

She told how she sat up all night on Wednesday night following the progress of the cyclone on TV and the internet, while her husband slept beside her. As he was a southerner, she didn’t expect him to understand, but she also said: I just hoped my husband didn’t really know how much I wanted to go home that night, to feel the forces of my land again, the sweet dense wind, rain hard enough to bruise the flesh.

Crazy as it might sound to the rest of you, there’s a kind of pride in being a North Queenslander, an acceptance that life is a bit tougher up here, and that everything is more intense – the colours, the scents, the lush growth… and.. well, yes, the weather…

Call me weird, but it's possible that life elsewhere would seem less somehow…

Anyway… as far as our property and Cyclone Yasi are concerned, trees came down, and now we’re now mulching them with the mulcher we bought with Kevin 07’s handout. !

On a sadder note, do you remember this photo I posted of Cardwell last week? I’m afraid it’s a VERY different scene now.
Posted by Barbara Hannay at 3:26 PM 9 comments: Links to this post

The calm before the storm... 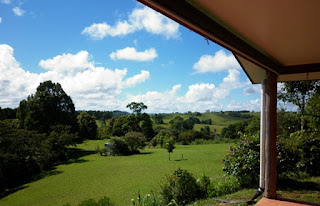 If the forecasters and every media outlet hadn't told us there was a cyclone heading our way, it would have been hard to believe it today. This was the view from our veranda this afternoon.

This afternoon, after we'd done everything we could to secure our home, I took a walk around the property taking in all my favourite spots, trying not to think too much about how things may be in twenty-four hours time. 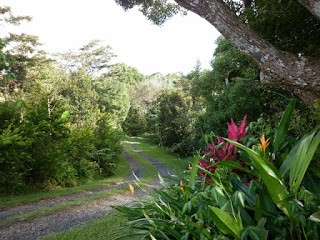 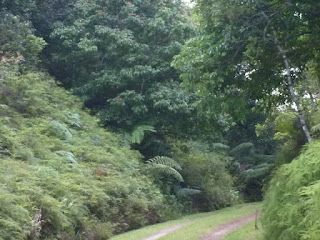 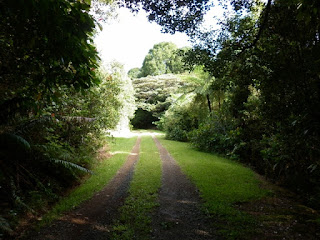 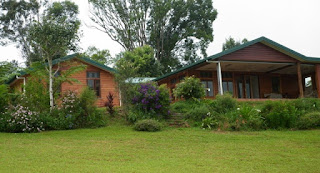 This is how our house looks now with the extension. 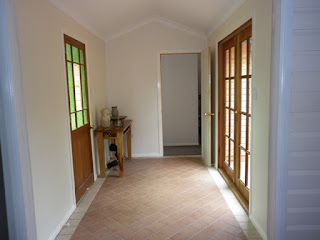 And this is the connecting corridor between the new and the old. 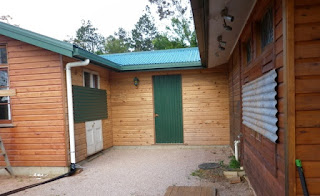 And this is how we've boarded up all the windows and doors, so now we feel we've done everything we can. And now, as my daughter says, it's like living inside Ned Kelly's armour.

Also, I've washed everything I could find and I've made fruitcake and casseroles and tomorrow we'll bake more bread before the power goes off.
After that, it's take a deep breath and have a glass of wine. And hope... Lots of love to everyone.
Posted by Barbara Hannay at 12:18 AM 31 comments: Links to this post