Actually, I’ve been back for a few days, but between jet lag and a mountain of dirty clothes and the minor matter of a deadline, I’ve been too busy to blog.

Since I was last here, I’ve had visitors, and we took them all over the Tablelands and west to Chillagoe. On one of our rambles we came across this gorgeous Outback river, which I just had to share as I put a river or creek in nearly every one of my Outback books. This is the kind of scene I usually have in my mind… 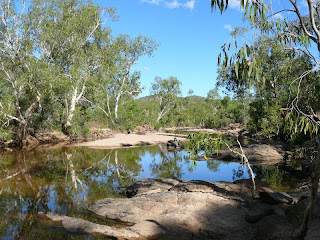 Then I was packing my bags for San Francisco and while I was away, Lilly turned two. 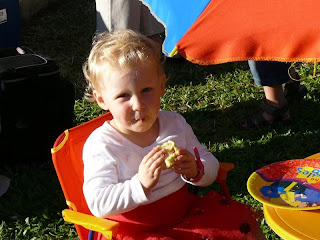 On the way to SF, I over-nighted in Tokyo, but instead of exploring, I holed up in my hotel room and wrote. This might sound weird, but the muse struck, you see, and she mustn’t be disobeyed. In fact I ended up writing ten pages long hand that day and I was thrilled! Then I hopped on an overnight plane to San Francisco and over the course of the next nine hours, I time travelled back to eleven o’clock the previous morning.

At the San Francisco Marriot, I was greeted by a beaming Afro-American who said with a huge grin, ‘We have a surprise for you!’

It turned out to be a message from Jessica Hart to meet her for dinner that evening. After crawling into my bed for a wee nap, we met. (Of course Jessica didn’t recognise me because my website photo was taken ten years ago) And we headed off for dinner in Chinatown and talked non-stop, as you can imagine.

The next morning, my hotel lost power. Yes! In the middle of a modern, sophisticated city like San Francisco and I had to carry all my luggage down fifteen storeys!! Luckily a lovely Japanese girl helped me by taking my overnight bag, but my wrist was shaky for the next twenty-four hours!

Jessica and I travelled by train to meet Barbara McMahon, who then drove us to Yosemite. Barbara lives in the Sierra Nevada and knows Yosemite well, so she was a wonderful tour guide.

The disappointing thing was that the entire area was ringed by bushfires. Actually, Barbara M was more disappointed than we were, because she knows how beautiful the valley and mountains look without the obscuring smoke haze. Honestly, it didn’t stop us from being overawed by the sheer beauty and grandeur of Yosemite.

Our Yosemite View motel motel had no power. Do you detect a pattern here? The authorities, we discovered later, had turned off the power some distance away in case lines burned and fell on fire-fighters.

Cold showers, cold food and candlelight became the pattern for the next couple of nights, but we were having such fun getting to know each other and exploring the beauty of Yosemite that we really didn’t mind.

But for the third night we left Yosemite and found a motel with electricity and hot showers. Bliss to wash my hair again!!! That night we stayed up past midnight rehashing and planning our workshop for the conference and on the drive back to SF next day, we “practised” the group work in the car. Believe me, the extra preparation paid off! (See how professional we were??)

I’m having trouble with blogger today. It won't let me move photos around, so I'll post more photos and tell you you more about the rest of the conference tomorrow.

Posted by Barbara Hannay at 9:24 PM

Glad you were able to wash your hair at last!! What an exciting time you had. I hope all the 'speaking' went very well. I love the beautiful outback rivery creek. There is something so relaxing and calming about gently rippling water. Gosh Lilly is growing up fast!!!

Can't wait to hear all about the Emotion presentation!