And where am I now?
It's actually a bit of a saga. The last few weeks have been rather hectic with a deadline, visitors and Easter (including important egg hunt)... 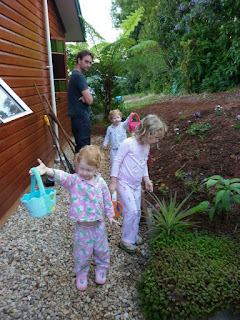 and then the big drive south for daughter Victoria's wedding.
Knowing it was a lo-o-o-ong drive from FNQ, Elliot had our car serviced and we bought two new tyres, then we set off... a night in Townsville first, and then heading south in convoy with son Richard.
We've never travelled in convoy before (apart from our very first trip north many years ago, when we were newly married and moving to Townsville -- when E and I drove in our separate cars. He in a little Austin and me in a VW beetle)
Anyhow, it was just as well we were in convoy this time as we had a breakdown (broken fanbelt) between  Gayndah and Goomeri (IOW, in the middle of nowhere). No, don't believe those stories about fixing a fanbelt with pantyhose. Modern fanbelts are very complicated creatures, connected to power steering and all sorts of things mechanical. Luckily we belong to RACQ and long story short, E had to stay in Wondai while I travelled on to Brisbane with Richard to be in time for Vicki's bridal shower the next day. 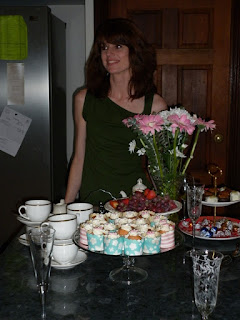 This was a lovely event, hosted by daughter Emma, who catered beautifully, helped (a little) by Lauren and me, and with Richard (a former chef) roped in to handle the icing of the cupcakes. 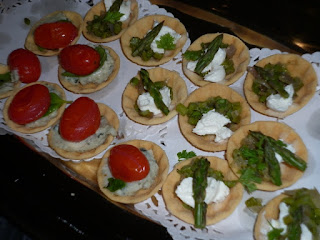 Meanwhile, poor Elliot was still in Wondai. Not sure why he minded, when a friend tells me it's a centre for growing navy beans and the 'baked bean capital" of Australia. :)
On Monday, bride Vicki, terrified her dad might not make it to the wedding, drove out to Wondai to rescue him.
Posted by Barbara Hannay at 12:02 AM

I am so glad everything worked out well. I wouldn't have had any pantyhose!!! The bridal shower looks delightful. I think this whole event is worthy of fictionalising, although Victoria may think otherwise, especially the bridal shower. I am sure the wedding proceeded with calmness and serenity!!