Last week I wrote about researching in the outback for my books, but I've been lucky enough travel further afield and to incorporate some of those settings into the single title books I've written for Penguin Australia.

This became especially helpful when I began writing dual timeline novels that incorporated a historical thread from WW2 alongside a contemporary story in an Australian rural setting.

I have been fascinated by Cornwall ever since we visited there in 1998, but also through reading Rosamunde Pilcher's novels, especially The Shell Seekers, and Daphne du Maurier's Rebecca (both of which I read long before Poldark hit the screens and wowed us all). So I was very happy to revisit this gorgeous part of the UK.

In my book The Secret Years, my heroine Lucy travels to Cornwall to find out more about her family and discovers a surprisingly aristocratic link. As we stayed in the grounds of a grand old house, I had plenty of inspiration. 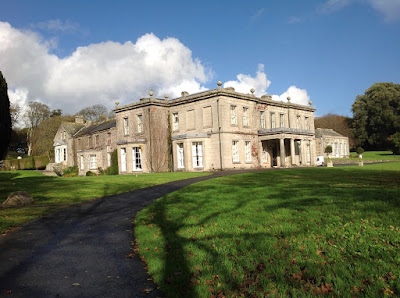 Apart from the obvious beauty of the UK and Europe, I think I'm also fascinated by the huge differences between North Queensland, where I live, and these northern hemisphere "old worlds". It's not just the stately old homes and leafless trees (the whole seasonal shift that we almost skip completely here in the tropics) that enchant me, but also the very visible evidence of history. 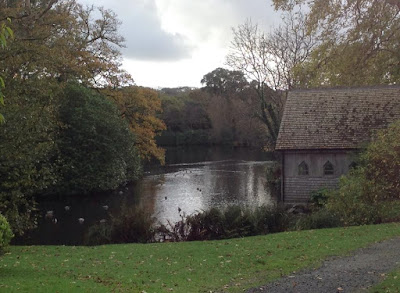 In The Secret Years, a very romantic scene occurs in a boatshed very like this one here, and of course that magical Cornwall coastline gets a mention. 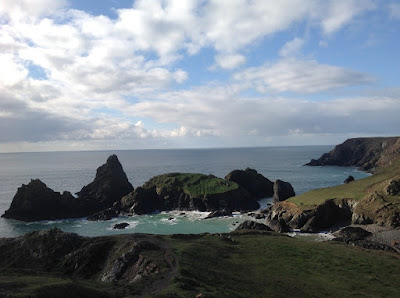 Also on that same trip, I spent  two wonderful weeks in Spain, primarily in San Sebastian, a city we'd also fallen in love with on a much earlier trip. This time we returned with friends, which always makes a holiday even more fun. The men on the trip were foodies, wanting to know all about making Iberian hams and about all kinds of smoking - that's smoking in cooking.( And, of course, they had to experiment with their own ham making when we got home, complete with Spanish caps.) 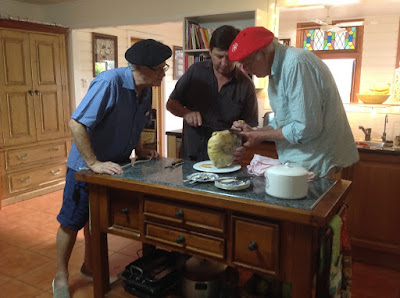 I was happy enough to share their eating adventures, of course, and to visit Spanish farms in the Basque country that specialised in making sheep's cheese or in raising pigs that graze in orchards filled with fallen chestnuts. But while these visits were very interesting, I also loved just strolling on the promenade - you can walk from one end of this beautiful La Concha Bay to the other, and, of course, the residents make the most of this beautiful walkway.

I decided that the Spanish must have terrible TV, because everyone seems to be out in the evenings, strolling in the moonlight, chatting on street corners, gathering in pintxos bars for delicious snacks (Basque version of tapas),  enjoying music (Spanish guitars, naturally)... It was especially great to see the elderly being included in these outings, either walking arm in arm with a younger family member, or being pushed in a wheelchair. 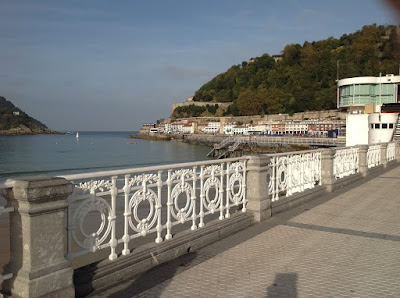 And I loved exploring the narrow streets, the old churches and markets where I could indulge in loads of people watching. 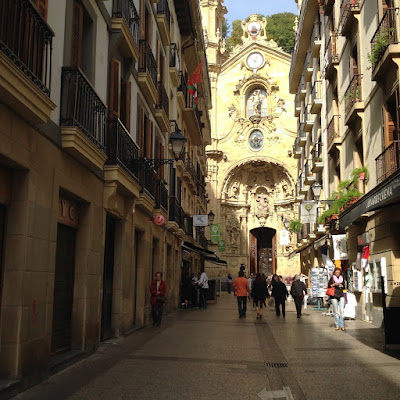 These experiences found their way into early chapters in The Grazier's Wife, but I didn't make it to Singapore to research the historical strand in that book. I had to rely on books and the internet to write about Kitty's time as a nurse in Singapore during WW2, but it's amazing how helpful these wonderful resources can be.

When it came time to write The Country Wedding, I wasn't planning to visit Shanghai where Lily and Rose are caught up in the turmoil of the late 1930s. I thought I'd manage once again with conventional research. I read Kazuo Ishiguro's When We Were Orphans which is set in Shanghai and I scoured the internet looking for just the right history books. I even had a secondhand dealer from a local bookshop trying to help me to track down Peking Sun, Shanghai Moon, a memoir by .Diana Hutchins Angulo

And then my husband developed a notion that I really should visit Shanghai. Just a quick trip. While I kept my head down on my book, he did all the negotiating with a travel agent and before I knew it, we were heading for China and what a wonderful experience it was. 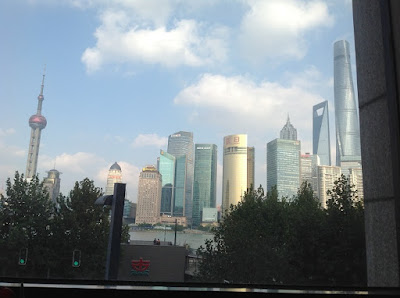 Shanghai is probably China's most westernised city. but it's also a city of huge contrasts . This was the view from our hotel across the Huangpu River to the incredibly impressive modern skyscrapers, and yet, we only had to walk around the corner and we were plunged into old Shanghai. (You can still see those skyscrapers in the background.) 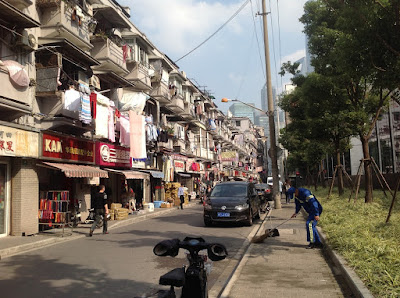 Here, streets are still swept with straw brooms and the footpaths are crowded with stalls, and cooking paraphernalia and washing hangs from windows on poles. Busy, busy, busy, but clean and colourful and endlessly fascinating. Needless to say, the museum in Shanghai is incredible and too amazing to do justice to here. 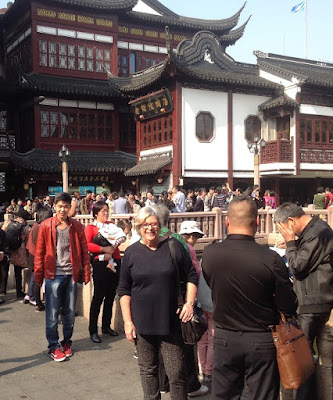 We  also lined up a tour of The French Concession, as I knew this was the area where most of the Europeans lived in the 1920s and 30s and most definitely where my character Lily's parents would have lived. In those pre war years, Shanghai was incredibly exciting. (By the way, the Chinese refer to the 1939-45 war as The War with Japan. My guide hadn't heard of WW2 and had no idea that Australia or PNG had ever been involved.)

Anyway, back then, Shanghai attracted artists writers and musicians from all over the world and was often referred to as the Paris of the East. Jews and White Russians were also flooding into Shanghai to escape the Fascists and Bolsheviks in Europe. Here are pics from the French Concession and you can see that it is very different yet again. 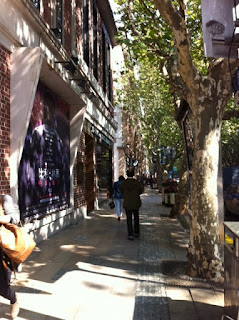 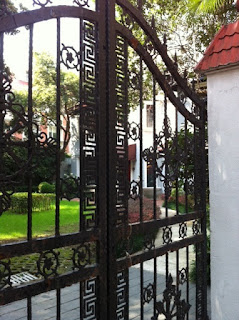 Our guide was excellent - knowledgeable, energetic and enthusiastic and very happy (make that excited) to be helping an author.  Under her guidance, we had some excellent street food (dumplings) and she also took us to a coffee shop (unusual in China) that also housed a fabulous collection of secondhand books. And it was there that I found - !! 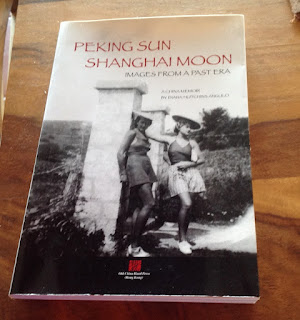 Yep, I was ecstatic. The perfect discovery to round off an incredible trip.

I'm afraid I didn't travel far afield to research my new book The Summer of Secrets, but there was still plenty I needed to discover to round out the historical background for my character, Izzie. I'll come back later to tell you all about her.

In the meantime, happy reading!

Posted by Barbara Hannay at 7:35 PM

Oh you have a gem of a husband! So much goes on behind the scenes before you even really start the writing, and how wonderful to have such exciting experiences. I Taught a girl whose mum was from Finland as we called her Mrs X and her husband was Mr Y because that’s the way their surnames work. Emily would tell us that when they went downstairs to the cellar in Finland, there was another door and window covered up and then another cellar, and it went down for 800 years. And their house wasn’t even considered old! Our house is 90 years old, and my nan would ave lived in it as a new house when she was first married. I have some of her furniture and it fits right in. Still, our house is not very old at all,,

Oh, imagine it! An 800 year old cellar.How lovely to be living in you nan's house. I must admit I have a preference for "old" homes (even though ours in Australia aren't really old), although I appreciate the practicality of brand new ones.

Am loving these little tales of your forays into different worlds to bring us your lovely stories, Barb. Was particularly wowed by your Shanghai trip -- those pics of the French quarter could almost be in Paris.
And I love the photo of E and his mates in their Basque caps, poring over a ham. Such fun.

Yes, I was amazed by how Parisian that French Concession was, Anne. And lots of art deco touches as well. Honestly, the trip to Shanghai was such an eye opener and I haven't even mentioned the food at the Lost Heaven restaurant. Would be a perfect Maytone. :)