A deleted scene from The Summer of Secrets...

Sometimes, when I'm finding my way into a new novel, I take a turn down a path that I later abandon. In The Summer of Secrets, I knew I had a heroine (Chloe Brown) with a loudly ticking biological clock and when her boyfriend tells her emphatically that he never wants children, she's left very much on her own.
Originally, I thought Chloe would then embark on an IVF program as a single mother and arrive in Burralea pregnant but determined. If you read the book, you will know this isn't quite the way things work out. But I thought you might still be interested in this scene telling how things might have been. I Loved this scene when I first wrote it... 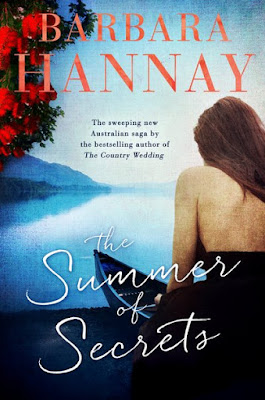 So here's what I deleted...

When Chloe woke, she was in a smooth white bed with a sheet tucked tightly over her. She'd been moved to a different room in the clinic and the handsome Indian Dr Singh had vanished. Now, a lone nurse sat at a stainless steel bench in the corner of the room, conscientiously reading some kind of manual.

Chloe drew a deep breath. She'd been on an emotional roller-coaster over the past six months since she and Jason had gone their separate ways, and her highs and lows had escalated since she'd embarked on a mission to achieve single motherhood.
She'd worried about having enough money for IVF, of course, but she'd squirreled away a tidy little sum while she was living with Jason, in the hope of one day buying their own home. And she had a good steady job at as a journalist at Girl Talk magazine, with proviso for maternity leave. So she'd decided that if she lived modestly, she and her baby should be fine.

The IVF process had begun with a series of interviews and assessments and then Chloe had been sent home with a cooler bag of medication and instructions to inject herself daily – to stimulate her egg production. Which had posed a major challenge as Chloe was dead scared of needles and no longer had a partner to help her.

This had also been her reality check, an important test of her motivation. In the months since she and Jason had split – a very tidy process on the surface with a great deal of stormy pain underneath – Chloe's need for a baby of her own had become her entire focus. And if she wanted a baby, she had no choice but to get used to doing all manner of things without help.

So she'd practised by sticking needles into oranges and then, well, she'd just got on with it.
Today – egg retrieval day – was the vital next step.
Ever so slightly phobic about medical procedures, especially those that involved an entire theatre of medical staff staring at her lady parts, Chloe had been inordinately grateful for general anaesthetic while her ovaries were probed. As she'd gone under, her last thought had been one of hope.

Now it was over. Her precious eggs had been harvested and she was supposed to check the back of her hand.

The lovely Dr Singh, a surprisingly young man with kindly, liquid dark Indian eyes, had understood the huge importance of this moment and he'd promised to write down the number of eggs on the back of Chloe's hand.

Who would have thought that checking her hand could be as nerve-wracking as looking up final exam results? Chloe closed her eyes and made a quick wish for plenty of eggs. So much was riding on this.

A chill flashed over her skin as she slid her hand from beneath the firmly tucked bed sheet. Just as Dr Singh had promised, the number was written in blue biro.

Disappointment exploded hotly in her chest. In her face. The girls on the internet IVF chat forum had talked of much higher numbers. Fourteen or even twenty eggs. Certainly more than ten. Chloe couldn't remember anyone who'd had a number as low as four.

Her throat tightened and burned. Tears threatened. Last night she'd joked about this moment with her friend Josie. 'Just my luck they'll harvest thirteen eggs from me.'

Not that Chloe was actually superstitious about the number thirteen, but last night that trivial possibility had seemed the worst that might happen. It had never occurred to her to worry about a number as low as four. She was fit and healthy and the women in her family all seemed to fall pregnant with ridiculous ease.

But they'd been much younger than thirty-seven when they'd started their families, she reminded herself now.

Four. She gave a shudder of deep despair and felt terribly alone. Even the nurse had disappeared.
She wished she'd accepted Josie's offer to come with her to the clinic, but she'd been naively optimistic and confident. This was only the start of her IVF adventure and everything would be fine.
Now, though, the journey ahead felt so much more precarious. Her four little eggs had yet to be assessed for quality and then placed under a high powered microscope for fertilisation with donor sperm. Chloe had chosen to use de-identified sperm. She'd wasted seven plus years with a man she'd deemed perfect, and now her baby's father would be happily anonymous. No pressure. No disappointments.

Once the embryos were fertilised, however, they would have to be tested yet again – fingers crossed that at least one or two would be viable – and finally, if she was lucky, perhaps very lucky, a little miracle would be transferred back into her womb.
Not for the first time, Chloe wondered if she shouldn't have been a little more adventurous with unprotected sex.

As she stared at the blue number on her hand, she considered texting Josie, the only person she'd been prepared to confide in about this venture. She felt a bit guilty about her secrecy. She would have liked to have told her family, but her mum was still mad at her for breaking up with Jason.
'For heaven's sake, Chloe, how can you break up with him after all this time? You've left it too late to be choosy about men. Any half decent fellow will be taken by now.'

As for Chloe's older sisters, she could never seem to find the right moment to talk. Rachel and Lisa were always so incredibly busy running their clever little children to an endless round of activities.
No one at Girl Talk magazine knew about this either. Chloe hadn't wanted to risk breathing a word about it in the office and she'd had to fudge the truth just to wangle today's leave.
If her editor caught a whiff of a single mum IVF pregnancy, she would have hassled Chloe to record the whole experience in a serialised diary format for the magazine. Last year she'd bullied another journalist, poor Jane Starling, into reporting her stomach stapling ordeal, for heaven's sake.

Chloe might have given in to tears of self pity, but the nurse reappeared, bustling through the doorway with a cup of tea in one hand and a plate of sandwiches in the other. She had a round, freckled face and short, flame coloured hair and her name badge said Hazel Bird.

'Hello there. I'm Hazel,' she announced with a mega-bright smile. 'How are you feeling?'

'A bit disappointed actually.' Chloe supposed Hazel already knew about her dismal egg count, but she held up her hand anyway, twisting it to show the number. 'That's not enough, is it?'
Hazel frowned. 'How old are you?'

Perhaps Chloe was super-sensitive, but the question felt brutally matter-of-fact. 'Thirty-seven.'
This brought a non-committal shrug. 'In our program, women under thirty-eight can have acceptable live birth rates with only three to six eggs.'

'Oh.' So there was still a statistical chance.

'Over six is better of course, but it's important to stay positive.'

Hazel's words were meant to be hopeful, but Chloe was sure she heard doubt in her voice. 'Right,' she said. 'Thanks.'

'Now, enjoy this cuppa and the sandwiches.' Hazel was brisk again, like a nanny jollying a sulky child. 'And then you should be right to go home.'

These days Chloe's home was a one bedroom flat in Glebe with a small study nook that she planned to turn into a miniature nursery. Not that she would dream of buying any nursery furniture until she knew there was an actual baby on the way. She didn't want to tempt fate.
She was happy enough in this new place. It was only a five minute bus ride from the Girl Talk office and on Saturday mornings she could go to the flea markets and stroll past the vintage clothing stalls, while fantasising about the interesting maternity outfits she might buy in the months ahead. Some weekends she had coffee at the café in Blackwattle Bay Park with its views to Anzac Bridge and she allowed herself to dream fanciful thoughts about bringing her baby here to this park in a pram, or later, when her little one was older, going for walks down to the water's edge. Perhaps there'd be ducks to feed.

Hazel asked abruptly, 'Is someone coming to drive you home?'

Dear Barbara, I just read “Summer of Secrets” this week and thoroughly enjoyed it. I loved the different stories woven through the book, and especially Murphy the Golden Labrador, and I imagined Black Velvet was a bouncy Black Lab! I almost left a comment to check that Murphy would be OK- I was relieved he was! I also loved the glimpses of the other people who I met in your previous books. It’s marvellous to be transported to the Tropical North. Oh and the dedication was very apt!! Looking forward to your next book!

Thanks so much 2paw. I'm thrilled that you enjoyed these stories and you know, I always think of you whenever I write a dog into one of my novels. :) xx