The saga of the steps

OK, so is this writing related? I fear not -- although there was a book called The Thirty Nine Steps with a lead character called Richard Hannay ...

But when we first bought a little patch on a hillside in the country, we went back to our city apartment and hurried straight to the library to take out books about gardening and landscaping -- and amongst these was a book about making drystone steps and walls. We immediately fell in love with the idea and Elliot raced out and bought some of the necessary tools almost before we got anything else -- even a spade!!. 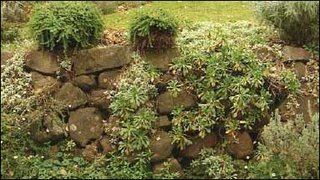 She was very fond of cottages with leafy natural gardens. Her designs nearly always involved the use of stone in walls and steps and paths.

This is an example of one of her walls softened by greenery on the right. 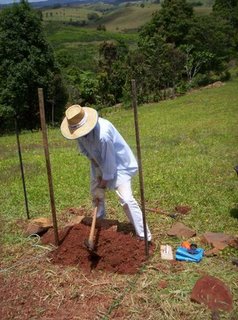 Anyhow... inspired by Edna, Elliot and I have been transforming our shed into a cottage and a 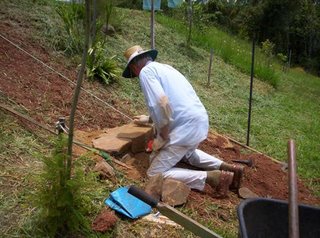 couple of weeks ago, we finally gave in to the urge to make some dry stone steps. So here are some pics to show you how we went about it.

The picture above is of Elliot digging out the site. I was very impressed by how professional he was, using stakes and string to mark the area!

I was foreman and chief photographer -- which meant I worked out which stones went where, I carried them to the site and shovelled the sand that was used to build them and generally bossed poor Elliot around. 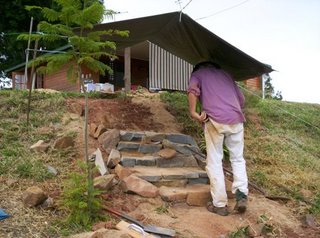 We erected a tarp to keep the site shady while we worked. 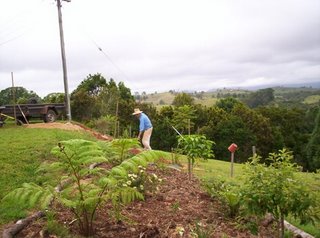 The steps in context -- here you see where they fit into the general scheme of things here -- part of a bank that I hope will one day be covered with interesting plants -- and that gorgeous view in the background. 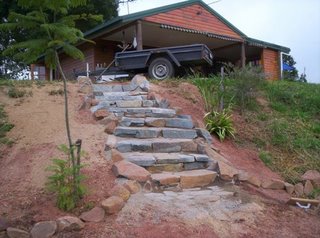 The final product, which will look so much better when the banks on either side are planted up and there's greenery to soften the stones.

We christened the steps last evening by sitting on them and having a glass of wine while we watched the sunset.

I promise I was writing in between step building!!!
Posted by Barbara Hannay at 12:26 PM

What lovely stpes. A work od art and they fit right in. Today I bought 3 tomato plants and 2 zucchini plants. I think they are sad as I will probably kill them..........
I love John Buchan's books, I prefer the old 39 Steps films to the one with Robert Powell, was it Kenneth More??? h Robert Donat in the really old one!!!

Barb! My goodness what a fab job you lot are doing with the place!!!

The garden leading up to the steps looks just lovely. And I attest to the view being utterly magical and very conducive to wine.

Tell Elliot I think he's doing a fab job too!

2paw,
I tried to post a comment on your blog but I was told it was comment spam. So I'm sorry it didn't make it, but I wanted to say what fabulous, entertaining posts you write. You should think about writing to be published!