A between books hiatus...

I'm still painting.
As my sister commented in an email, it is rewarding because you do see immediate results (although that first undercoat always looks a bit grim.) We're in the dining room now... and... on the writing front, I'm waiting to hear what my editor thinks of my new ideas. Very soon I'll have to dive into a new book. 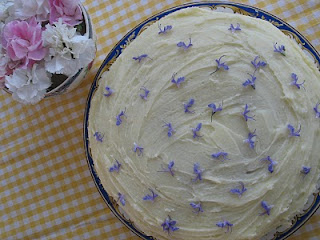 Yesterday, I made a Tessa Kiros recipe -- honey cake with chopped rosemary in it and lemon icing with rosemary flowers scattered over the top. It's ages since I've made icing, however, and it was a bit runny, so I've had to borrow someone else's photo. Mine looked almost like that, but you could see the brown cake through the icing. In painting terms, it looked like a first layer of undercoat. :)
Honey cake sounds rather romantic and Winnie the Pooh-ish, doesn't it? And it is rather yummy, so once I've perfected it, I'll pass on Tess K's recipe.
Posted by Barbara Hannay at 4:20 PM

Oh that cake is so gorgeous, it looks like art, not just painting!!

Yum. It's so pretty.

Mmmm. I am awful at icing, but I think a few strategically placed flowers would help....