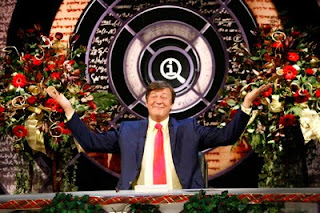 Did anyone watch QI last night? (This is a BBC TV show, but I'm talking about the Australian screening on Tuesday nights at 9.30.)

Which might explain why many writers have zones when writing flows quite well
and others when it's like wringing blood from a stone.

This was a bit of a light bulb for me as I had surgery on the outside of my nose a few years ago that caused inside cartilage in my right nostril to collapse. There are times when I can't sleep on my left side, because my right nostril is blocked -- and times when it seems to be OK. Now
I might know why. :)

Now if I can just use that to work out which nostril is working when, I'll know when to get cracking at the keyboard.

I did start a new book yesterday (at last). I'm really looking forward to it, but yesterday was a blood out of stone day. Beginnings can be so tricky. You have to work out exactly where to start and how to grab the reader's attention and how much to tell about the characters and what kind of mood you want to establish, and what kind of world you want to paint, and what's important to know straight up, and...

My wordcount yesterday was dismal, but I know this happens with every book, so I'll stop complaining and just get on with it.

Quite Interesting - or 'QI' to its friends - could loosely be described as a comedy panel quiz. However, none of the stellar line-up of comedians is expected to be able to answer any questions, and if anyone ends up with a positive score, they can be very happy with their performance. Points are awarded for being interesting or funny (and, very occasionally, right) but points are deducted for answers which merely repeat common misconceptions and urban myth. (Alan Davies has turned this aspect of the game into somewhat of an artform.) It's okay to be wrong, but don't be obviously, boringly wrong. In this way, QI tries to rid the world of the flotsam of nonsense and old wives' tales that can build up in your mind. QI not only makes us look more closely at things, it encourages us to question all the received wisdom we have carried with us since childhood. Think of the program as a humorous cranial de-scaler.

Posted by Barbara Hannay at 2:12 PM

Barb - we love the show and watch every week. Always thought QI was a play on IQ though so that snippet was interesting...and also to learn the 'rules'.

Who knew your nostrils had so much power? :D

I wish we has started from the very fist show. I wouldn't have minded at all.
Oh the nose info is great. I haven't caught up with all of QI yet it's sitting on the DVR in the bedroom. I can't watch TV in the bedroom so I have to copy it to the lounge room: the proper TV watching place!!!