Yesterday was the anniversary of the bombing of Darwin during WW2, which happened when my husband was just nine days old.


I often think about my poor mother-in-law at that time. She’d already had several miscarriages (Elliot was her only child) and her husband was away with the Air Force, flying bombing raids against the Japanese over PNG and Indonesia. And on top of that, people in Queensland were absolutely terrified of this new threat on their very shores.

In fact, there was a strong belief at the time that the government had a policy called the Brisbane Line. All the north of Australia beyond Brisbane would be abandoned to the invading armies.

My mother-in-law was above this line, living in Bundaberg on the Queensland coast, and in the last weeks before she gave birth, she was evacuated inland to Murgon. So much stress on top of the normal stress of giving birth for the first time.

It’s easy to forget how brave every day Australians had to be – even those who were far away from the warfront. 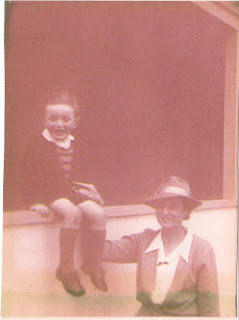 I love these two photos of Elliot taken with his parents during the war years. He was three years old when his dad finally came home for good. 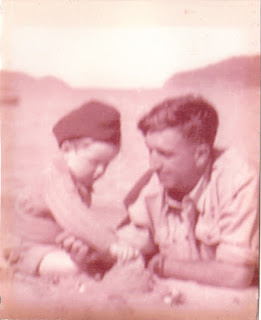 Posted by Barbara Hannay at 5:51 PM

We never learned much more at school other than Darwin was bombed and I really don't know why it has taken this long for the whole story to be told. Elliot's mum must have been very brave and I am glad his dad returned safely. My mum remembers aeroplanes flying over Hobart and having bomb shelter training at school, actually I think it was just jumping into trenches. I'm re-watching The World at War right now and I think it should be mandatory viewing in schools.

I'm so glad his father made it home safely. Thanks for sharing those photos. I loved seeing them.

Yes, my mum remembers the subs in Sydney Harbour. Townsville was bombed during WW2 as well. The school where I used to teach (Not back then:) was taken over as US headquarters.
Thanks Lacey and 2paw.