It’s almost twelve months since Cyclone Larry wreaked havoc in Far North Queensland. The supermarkets are selling bananas at a reasonable price again and most Australians have breathed a sigh of relief and assumed that everything is back to normal in Innisfail and other places Up North.

I wish I could assure you that this is so, but I’m afraid I can’t.

Last year, I was shocked by the devastation in my favourite part of the world from Tully north to Innisfail and west across the Atherton Tablelands. When I reported the terrible losses both human and natural on an email loop, my fellow author mates from all over Australia responded generously by sending me copies of their books to replenish stocks in Innisfail’s damaged library or to restock the personal libraries of those who lost their homes.

They and I thought that within a couple of months I’d be happily handing these over to grateful recipients. But after many phone calls with Innisfail’s librarians, I realised that the aftermath of a natural disaster of Larry’s proportions is not so easily overcome. First the librarians were working out of the Shire Hall along with councillors and many other departments, then they finally were able to set up a small demountable building, but this was so small that they had no room for extra books.

Now, at the end of January, almost twelve months later, they are finally able to accept the books and “hope to be opening soon”. It’s not that they aren’t grateful for the wonderful books received. You should have seen their eyes widen with excitement when I opened the boxes to reveal so many titles including Anna Jacobs and Helen Bianchin and (hardcover) Stephanie Laurens. The problem is that, in Innisfail, they are still working under conditions that would make most of us tear our hair out.

In order to make my deliveries, I negotiated my way through the wire fences marking the construction site, and daringly entered the new library without a hard hat. 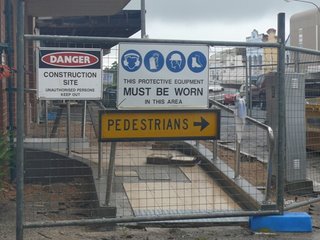 Meanwhile, across the road, the Catholic Church is still undergoing major restoration work, as this photo I took yesterday shows. 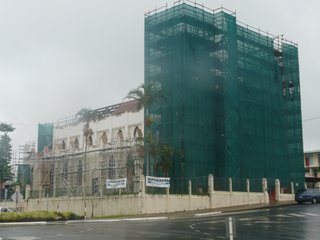 And the old library, plus a building opposite, sit abandoned and roofless – as do many homes in the surrounding areas. 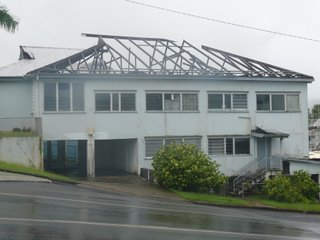 Another point not easily understood was the extensive path of damage caused by Larry, reaching far inland, and for this reason, I also contacted libraries at Atherton, Malanda, Millaa Millaa and Yungaburra. Books were welcomed in these towns with open arms. Librarians were touched and thrilled, especially because the books were all written by Aussie authors. I also explained that some books were autographed and that they might be more suitable for romance fans whose private stocks were lost. This idea was met with approval. “We’ll make sure they find their way into the right hands,” I was told.

One librarian also told me that many people made a huge effort to save their library books even when half their house was blown away. So North Queenslanders do like to read!!!

Thank you to all the generous authors who donated. It was a pleasure to finally deliver your books. And I can assure they will be loved. 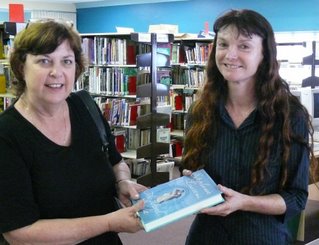 That's me above, with Wendy at the Innisfail libarary.

Posted by Barbara Hannay at 8:55 PM

Well that certainly bought a tear to my eye Barb. So pleased us Aussie authors could be a part of something so wonderful. After all, life would be really dull without books!

The devastation from natural disaters is just mammoth isn't it? What a wonderful donation. We are lucky to have such excellent State Libraries. Ours here is fantastic, despite being not very well funded. More money for books I say, and no GST on them either!!!