new additions to the family... 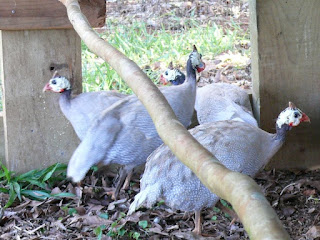 We are now officially country folk with a little flock of guinea fowl. Four adults and four babies (the babies are called keets.) 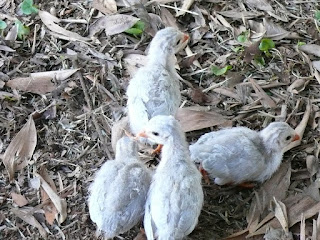 Elliot has built them a house, with lovely leaf litter on the floor full of worms and insects and they have an automatic grain feeder and an automatic water dispenser, a mirror for them to admire themselves (they adore it!) and perches on which they can roost -- oh, and shade as well as protection from the rain. 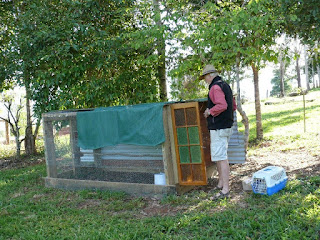 We’ll keep them in the pen for three to four weeks, and after that they’ll be able to free range on the block, the plan being that they’ll return to the pen to roost each night. There’s a special high opening and shelf for them to fly back in that keeps them safe from cats etc. 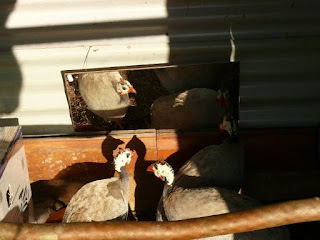 Here they are checking themselves out in the mirror. E read about this trick on the internet. Honestly, they stay there for hours admiring themselves, or trying to work out what the heck these other birds are -- and at least it stops them from fretting about being in the pen while they get used to our place. We already have one egg, but we’re not planning to eat it. I’ve begged that we don’t eat any of the birds either, in case you were wondering. 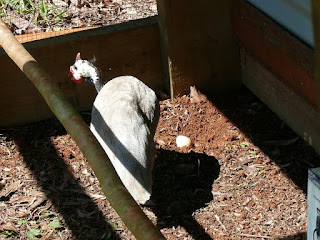 One reason we wanted guinea fowl, apart from the fact that they’re quiet and look cute running around the place in their flocks, is that they’re reputed to be very good at catching and eating ticks and chasing snakes. In other words, they deal with two drawbacks of country life in one blow.
If you’re worried about what will happen to them while we’re doing our city stints, our lovely neighbours will be keeping an eye on them. A big plus of country living. Will keep you posted.
Posted by Barbara Hannay at 12:08 AM

Oh they are lovely. Will you give them names???

What fun! Like 2paw, I was also wondering about names...

Well they've got a house and a half don't they? Five star guinea fowl pen, all the others will be jealous :D