I talk a lot about travelling between the city and the country and back again, but I've never described the trip for you, so I thought it was about time I did. I want to show you that in the space of a few hours between Townsville and the Tablelands, we almost feel like we're going to a different country. If we were in the UK, I guess we easily could be.
Townsville is in the dry tropics, so when we head north, we first go through rather a long stretch of rather uninteresting bush. But maybe I find it uninteresting because I grew up in the south where the bush is softer and greener. My son, who was born here, loves the straggly bush around Townvsille. 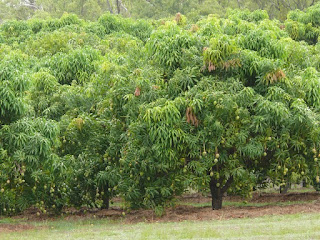 Depending on the time of day, we sometimes stop at a place about forty-five minutes to the north called Frosty Mango. Here they sell fabulous ice cream made from tropical fruits -- mango (growing on trees to the left), pineapple, banana, soursop, black sapote -- as well as popular favourites like tiramasu and strawberry vanilla. These mango trees and coconut palms grow in the surrounding gardens, as well as a variety of tropical fruit, so it's quite a tourist draw card. 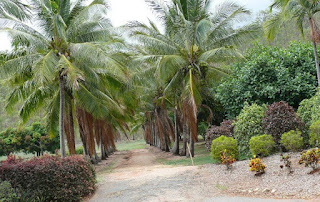 From there we drive on to Ingham, a small sugar-growing town with a large Italian population. 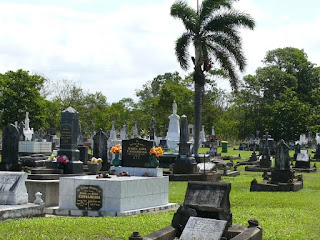 Actually, all the North Queensland sugar towns were settled by Italian migrants and the delis are fabulous -- full of divine salamis and homemade pasta and pannetone etc. The cemetery in Ingham is worth a visit because of the rather splendid Italian gravestones -- and, as with all cemeteries, the headstones tell so many stories. 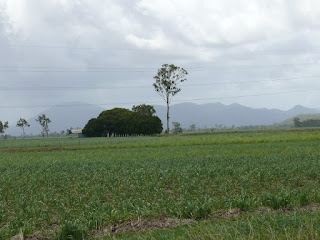 This year's sugar crop has been harvested, and the new cane is only a a few inches high (just looks like grass). By next June it will be well over six feet and topped by pale mauve feathery plumes. 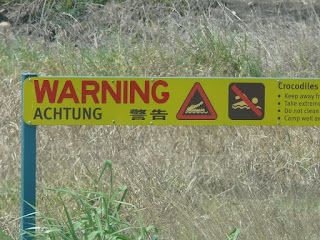 Have I mentioned that crocodiles are a distinct possibility in all waterways in Far North Queensland ? So unfortunately no swimming outside the safe enclosures. 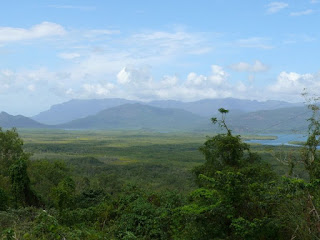 All the way, as we travel north, we have the Great Dividing Range (called Seaview Range here) to our left. These mountains get taller around Ingham and they often remind me of a dragon's spine. Just north of Ingham they tumble down to the coast and offshore they become Hinchinbrook Island. We have to climb over the range and on the crest, we have a fab view of the winding waterways in the Hinchinbrook passage (above). Then we drive down a windy road with rainforest on either side, and on to Cardwell. 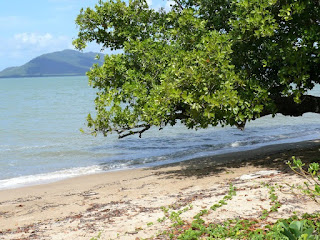 Cardwell is right by the sea and a must stop spot! I love it here, sitting on the beach where the Coral Sea (protected by the Great Barrier Reef) laps gently at tangled mangrove roots. You can look out at Hinchinbrook and Gould Islands, watch sailing boats and wonder about the adventures they're having... 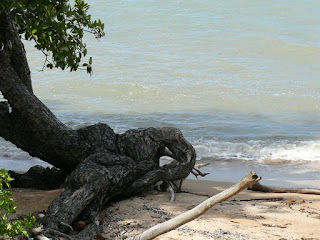 This the half way point in our journey. More tomorrow...

Posted by Barbara Hannay at 6:25 PM

Oh Barbara, this looks like a different country to me all the way!!
It is fabulous though and I hope you do this again in six months so we can all see the differences!!

Barbara, thanks so much for this lovely trip through one tiny bit of Australia. I actually copied your article on my computer for future reference. As you know, we'll make it to Queensland one day.
Lucky you, having fine weather at the moment. After a mild autumn it's getting quite frosty now over here.
I'll be looking out for the next leg of your journey.

Brigitte, I'm so pleased you plan to come to Queensland some time. Mind you, I do like the sound of your frosty autumn.
Ah, the four seasons -- one of my dreams.

Lacey, does this mean you're a Queenslander?
No northern backyard is quite complete without a mango tree.

I'm a Cairns girl Barbara. But I don't travel as much as I would like (certainly not close enough to the Frosty Mango anyway ;) ). I haven't been up to Kuranda in years either. I'm a very bad Cairns resident...

Gosh, Lacey, we're practically neighbours. If you're an aspiring writer and you'd like to come to one of FNQ romance writer "days", do get in touch.