OK. Carrying on from yesterday's post about travelling north between Townsville and the Tablelands... 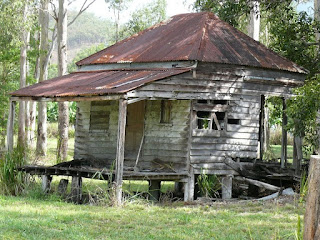 Just north of Cardwell, this iconic structure has given me endless fascination. Isn’t it gorgeous? Or am I plain weird? Anyway, it’s an old smokehouse – where pork became bacon and beef became corned… beef, and behind it now is a nice modern white farm house and a banana plantation. 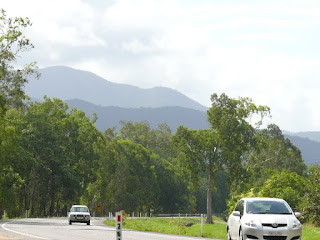 Ahead of us now, the mountains loom even larger as we approach Tully, and we know that our Tablelands are up there, too… somewhere in the clouds. If I remember correctly from long ago geography lessons, it’s thanks to the height of these mountains that Tully has the highest annual rainfall in Australia. The south east trades blow up the coast, warming over tropical waters, then they have to rise to go over the mountains and they cool and condense. It’s called orographic rainfall. There, that’s a little bit of information you may want to forget…
Anyway, we drive on through Tully and towns like El Arish, where soldiers settled after WW1, and named after the battle in the Middle East, and then we come to the turn off where we leave the coast and head for the hills. 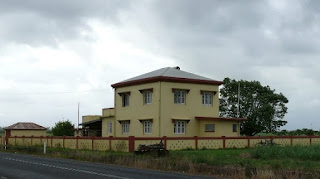 For us, the turn off is marked by this Italian house that stands head and shoulders above the surrounding cane fields. We always get a bit excited when we reach this point. 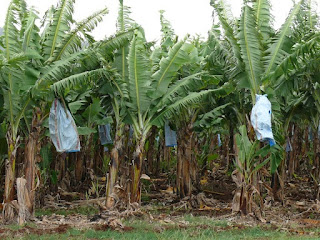 We pass banana plantations that were flattened a few years ago by Cyclone Larry, and for six months the whole of Australia went without bananas, or paid astronomical prices for imports. 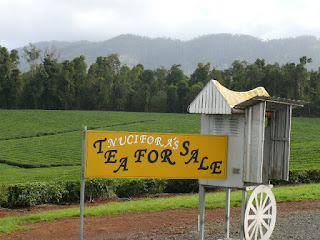 And then we keep driving west, moving first into the uplands, which are already greener and cooler, and we pass tea plantations. Doesn’t tea grow neatly? If you double click on this photo, you will see how it grows in neat hedgerows. Mechanical harvesters clip the new growth, helping to keep it neat. Did did you know tea is a relative of the camellia? (Another trivia fact) Australia’s famous pesticide free Nerada tea is grown near here.
Now we watch the car’s external thermometer start to drop as we climb the Palmerston Highway through thick rainforest and past crystal creeks… until we emerge on the Tablelands where it’s invariably misty and green. Here sugar cane and bananas have given way to dairy cows and milk factories… and we truly do feel as if we’ve arrived in another country. 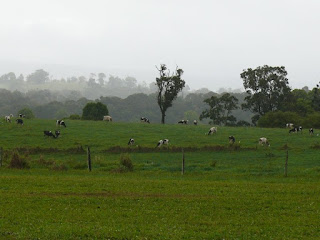 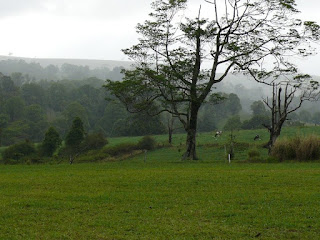 I love the tea picture, tea is very nest. The last pictures look the most like where I live. I think the landmarks/houses make the journey go much faster.
When we were small we played a game in the car where little houses, goats' triangular shelters, or ruins were spotted and then assigned to members of the family. My sister would cry if you said she lived in that smokehouse!!

No I love the smokehouse too so they'll have to have us both committed if we're crazy. Old structures always fascinate me I'm so glad they leave them be.

Thank you for taking us on the trip with you, Barbara. Loved all of it! Also very intrigued by the smokehouse. I'm sure its builder would think us all silly for being romantic about something so utilitarian.